We Should Be Dead-Forget Romance, Let's Dance CD Review 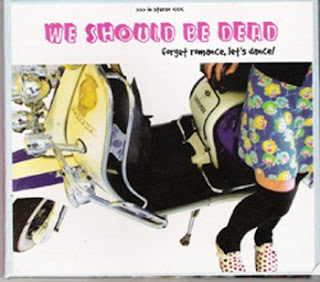 Irish music site Redtrack Music cited Forget Romance, Let’s Dance by Limerick based band We Should Be Dead as 2008’s Debut Album of the Year. Even a cursory listen to this CD of melodic pop songs makes you understand why. This bouncy Irish new wave dance band recently relocated to Los Angeles, where they’ve gigged around town on a regular basis. They’re slated to appear at the official SXSW showcase this month after a short tour of the Southwest, so they’ve maximized their first few months in the States. The foursome is led by vocalist/keyboardist Tara Nix, guitarist/vocalist Anna Murphy, drummer/main songwriter Stephen Purcell, and bassist Gary Healy. What began as a fun studio project for Purcell and Mix evolved into a full-fledged band. Murphy, one of Nix’s former collaborators and a childhood friend, joined the project, along with bassist Healy, and We Should Be Dead was…aaa… born. A fave in their native Limerick, We Should Be Dead’s tunes recall the spry and sassy hooks of The Like, Giant Drag and the Ooh-las. At the same time, the band channels the 70s and 80s new wave of Blondie and the smooth but vivacious vocals of Bananarama.

The band’s Pop4pop release, Forget Romance, Let’s Dance, certainly delivers on the title’s promise. The best of the album’s fresh, compact sound is exemplified by the title track, which conjures up images of Altered States and Bow Wow Wow’s I Want Candy era. Zero Point Five and Disaster provide more frothy and fun new wave danecability. more On Summer Street, Tara gets tough as she sasses back at a womanizing ex-lover. The band proves it can rock out on other tracks too, like Fuckin Around, another rant against a bad boy, and I Can’t Find a Reason, which mirrors Veruca Salt’s Seether in places-with girl group harmonies at the end. The CD’s closer, Ladies Night, has a catchy guitar riff and enough attitude to transcend the band’s basic pop sound. We Should Be Dead has a goth sounding name and a CD of breezy three minute dance songs, but they can strut their stuff if they feel like it.
Posted by JadeB at 5:50 PM No comments: