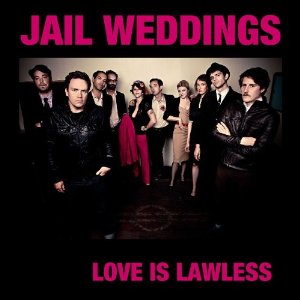 Jail Weddings, a 10-person, '60s retro-pop ensemble from Los Angeles, brings theatrical flair and soul-baring heartache to their first full-length CD Love is Lawless. The band formed in 2006, and released two singles and a well-received EP, Inconvenient Dreams, before dropping this 13-song manifesto about love and loss.
Gabriel Hart, formerly with punk-noir band the Starvations, is the mastermind behind Jail Weddings. He writes and arranges angst-ridden tales of love that alternate between melodrama and vulnerability so often-and so quickly-that mere bass, guitar and drums can’t contain it. The ensemble puts together all the puzzle pieces into a pastiche of retro keyboards, spicy sax interludes, brooding Nick Cave vocals and tongue-in-cheek humor. (One of the songs is titled “What Did You Do With My Gun?”). Background vocals by Katya Nadia Hubiak and Jada Wagensomer are used to great effect, placed at just the right spot to prevent the angsty lead vocals from becoming overwrought.
For a band that’s chock full of bodies, the sound is neither complicated or too artsy know-it-all.  Jail Weddings has a violinist (Hannah Blumenfeld) and a sax/glockenspiel player (Brad Caulkins). But don’t let that scare you.  The songs clock in at about three minutes each and are more dramatic soul/pop than anything else.
Jail Weddings combine the best of doo-wop, girl-group harmonies, and deep-voiced Scott Walker tales of woe. Remember when you first heard the Walker Brothers” The Sun Ain’t Gonna Shine Anymore” and his voice just hit you – same here with Hart’s vocals on many of the songs on Love is Lawless. While heartbreak may be the main course here, there are sprinklings of revelry. “Tough Love” is country swing with feisty female vocals. “When We’re Together (We Let Ourselves Go)” has the album’s catchiest melody, one that hums along at a buoyant pace. It’s the kind of song that makes you say, “Hey, play that again.”  On Love is Lawless, Jail Weddings pay homage to the Shangri-Las and the Wall of Sound while branding their own “pop orchestra” sound.

Read more: http://blogcritics.org/music/article/music-review-jail-weddings-love-is/#ixzz17dN4aObI
Posted by JadeB at 8:57 AM No comments: