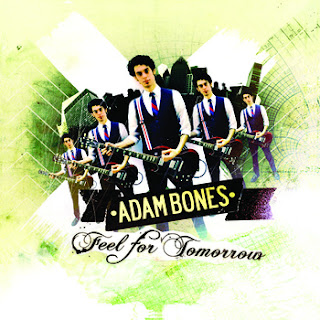 Adam Bones’ EP Feel for Tomorrow packs all the promise of his energetic stage shows into five tunes that will keep you shakin’ to the beat. Bones, a Chicago native who is currently based in Hollywood, infuses his songs a harder, grungier sound than many so-called “power-pop” artists. His guitar takes center stage, turning each song into a finely-crafted mix of pop hooks and memorable riffs. Feel for Tomorrow begins on a tender, melodic note and then soars into guitar-heavy rock anthem territory. I Had You packs killer guitar riffs and gritty, baritone vocals make into 3 minutes and 55 seconds of pure musical energy. The song has such an upbeat, Romantics circa 1980 feel, I just wanted it to keep going…and going and going, sort of like the Energizer bunny.
Feel for Tomorrow is authentic rock ‘n’ roll that everyone can love; it’s good solid, foot-stomping fun. Some of the songs remind me a bit of fellow Chicagoans Urge Overkill, but then there’s the bluesy, hard rock approach of How Hard I Needed You.  If we still lived in the good ‘ole rock radio days, DJs would say that Bones’ music has crossover potential. He’s playing a Tuesday night residency at the Redwood Bar in downtown L.A. this month, and he’s played gigs with Sylvain Sylvain, Ari Shine, the Wellingtons and Chris Shiflett of the Foo Fighters.
You can download Feel for Tomorrow at Bandcamp
Posted by JadeB at 11:17 PM