While punk rock in general was way underground in the late ‘70s and early ‘80s, Flipper had the dubious distinction of being on outsider in their own scene. Eschewing the generally faster than thou riffs and two minute songs of their peers, Flipper were the punk answer to a jam band. Their bluesy guitar and long, sludgy jams brought to mind early Stooges. Flipper also suffered indignities worthy of Spinal Tap, except according to an interview with Bruce Loose. “it was the bass player who died, not the drummer.”

To further complicate matters, the singer, Will Shatter, died of a heroin overdose in 1987. Flipper’s seminal first album, Generic is out of print and sells for as much as $80 on Amazon.com. American Grafishy, an album recorded with uber-producer Rick Rubin in the early ‘90s, brought the band back to the public’s attention, but faded quickly.The surviving members of Flipper reunited in 2005 for a show at CBGBs, and performed again at the Knitting Factory this June.

Guitarist turned frontman Bruce Loose walked onstage with a cane, but this did not stop him from delivering a powerful performance. The band played with a vitality that practically shook the stage, proving that time and tragedy hasn’t dimmed Flipper’s power.

Of course, Bruce Loose couldn’t help but deliver some between song commentary on the recent court decision allowing police to search property without warrants. That mention may have been lost on some of the younger kids in attendance.

Crusty old rock critics with anarchic grading systems, slick A and R executives, bitter failed musicians, these types are entrusted with the job of telling you what music is good. Don’t listen to ‘em.

Ya know who to listen to? 14 -16 year old kids-cool 14-16 year old kids, not exburbuan kids who buy My Chemical Romance shirts at Hot Topic. You have to ask the cool "misfit" kids what they're into. And a lot of them are into the Stitches.
Mosh pits at punk shows usually consist of sweaty, tattooed guys. However at this all-ages show, the pit during the Stitches show consisted of teenage kids, girls and boys alike. They moshed playfully, except for a mid-set altercation near the back of the club when nearly all eyes focused on the melee.

Stitches songs are fun to listen to anyway, but even more so when played live. No drunken shenanigans tonight, no skinheads getting bashed over the head with guitars or endangered kittens, but the show was fun nevertheless. The band ended their set when vocalist Mike Lohrman sang an acapella version Floozy Of The Neighborhood. As guitarist Johnny Witmer left the stage, he slapped electrical tape over Mike’s mouth. 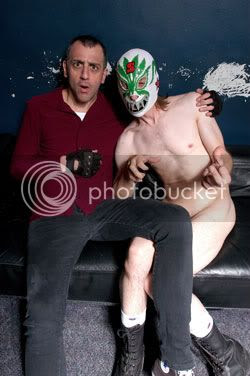 Contrary to usual opinion, I believe if a band has dirty album covers, that’s a sign of innovation and integrity. (Well, except for the late, great Mentors.) Thus the Dwarves sound as good as they look, or as good as their album/CD covers look. The Dwarves began their Knitting Factory set with a clip from their new video for FEFU, which features a plethora of Suicide Girls alternately oogling and beating the shit out of our boys. Then the band blared onto stage in front of a packed floor of heathens, performing favorites like Salt Lake City, a gleeful pop-punk song which should have been an all-around radio hit. But for every action, there is an equal and opposite reaction with songs like FEFU and Fuck ‘Em All (notice a theme here?) The Dwarves formed in suburban Chicago in 1983 and eventually relocated to San Francisco. They were dropped from a record label, Sub Pop, no less, for too much joking around. Gotta admire that.

Guitarist He Who Could Not Be Named wore a Mexican wrestler mask and little else...don’t remember if we’ve ever seen his face but we occasionally see ..ummm.. other stuff. Vocalist Blag Dahlia is obnoxious as ever. Seems age has not calmed the Dwarves down too much. And, the sound was so loud it popped my summer allergy plugged ears back to normal. What doctors can’t cure, loud punk rock can… 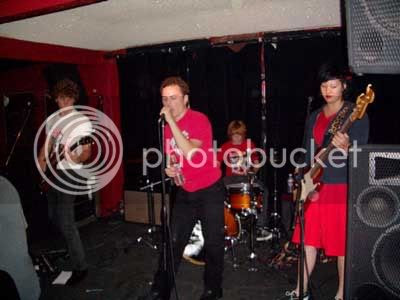 “How old is that drummer?” someone shouted from the Knitting Factory floor shortly after the Diffs began playing
14, came the answer.
And Maxi Pad (aka Max Kuehn) can hit the drums, lemme tell ya.. this band has a lot of people talking, including the LA Times, LA Weekly and Punks Not Dead director Susan Dynner. Bassist/vocalist Paulene has that vintage Exene look and singer Rick Slick channels old-school punks like Darby and Lee Ving. These kids have more guts than a lot of bands twice their age.
Diffs.net 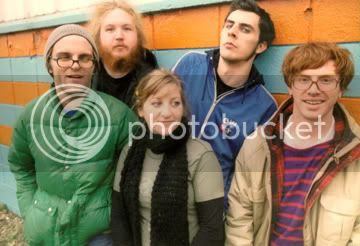 Three keyboards! What is a band with three keyboards and a fog machine doing at a punk rock show? Richmond, Virginia based VCR are more rock ‘n’ roll than punk and certainly not “hippies” like an errant audience member suggested. They are more like a fun bar band than a band with a mission that fits into a neatly boxed genre. Don’t let the keyboards scare you.