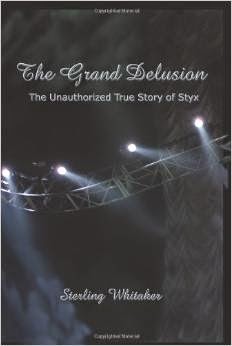 I have a soft spot in my heart for Styx. I was born in Roseland, the neighborhood where Dennis DeYoung formed the band with the Panozzo brothers. My grandmother would bring me newspaper articles about them when I was in junior high. The band played shows in high schools and colleges near my house when I was a kid, as did MS Funk, Tommy Shaw’s band prior to Styx.  And when I studied arts management in college, the class received copies of the band’s 50-page contract rider.

“The Grand Delusion”, Sterling Whitaker’s unauthorized bio of  Styx, is a fascinating read. Now, be forewarned, this isn’t your usual tale of rock ‘n’ roll debauchery.  A sex and drugs bacchanalia this ain’t.  Except for a few brief hints at Tommy Shaw’s womanizing and drug use in the early ‘80s, this book is dirt-free. No, the book is riveting for its look at the soap opera-like rise, fall and revamping of an arena rock band of the 1970s and early 1980s, with a cast of characters that manages to be intriguing even without page after page of scandalous behavior.

“The Grand Delusion” is comprised of interviews with managers, promoters, publicists, fans, friends, radio hosts and journalists who dealt with the guys at various points in the band’s history. The author interviewed Tommy Shaw  in the early 1990s,  but the book lacks new interviews with JY and Dennis. Meticulously researched with information from newspaper and magazine articles and other sources, it gives a fair overview of the band’s situation.

Dennis DeYoung was portrayed as the bad guy in “Behind the Music”, and he comes off as a narcissist in “Grand Delusion”, too - but I got the sense that he can’t help it. I had to put the book down a few times and say “Was this guy for real?” Despite this, he comes off more as a quirky character than an arrogant bastard.

Tommy and JY weren’t angels, either, but after reading all the details in this book, it seems like they  just cracked after putting up with Dennis’s tantrums for so long. They finally ousted him from the band in 1999  when he couldn't continue their reunion tour due to health problems.

There’s virtually no opinion added by the author; the book is mainly interview transcripts. The foreword by Glen Burtnik, former Styx guitarist, puts it all in perspective - Styx was never cool, but a lot of people bought their records.

“The Grand Delusion” is a great read if you like Styx or have any interest in classic rock music. If you’re fan of “Hit Men” type music books focusing on the old school music business, the interviews with the band’s former managers will give you an insight into how a well-oiled, big money rock ‘n’ roll machine worked.

If you’re not interested in the music business, the book works great as a tale of human psychodrama. You might even get some ideas for a screenplay - the dramatic version of Spinal Tap, perhaps?

Thanks to Sterling Whitaker for a great book about an often neglected band. Reading this book renewed my interest in Styx.  I've even warmed to the current incarnation of Styx, and I usually write off a band after their hit-making line-up ceases to exist.
Posted by JadeB at 3:00 PM No comments: