Well, I knew it was bound to happen one day. After years of ignoring reality TV shows (or watching small clips for writing assignments), I have joined the ranks of otherwise intelligent women who turn into cackling hens when discussing the exploits of botoxed reality show housewives.
It all started when my BFF told me I should make an exception to my reality show ban and watch something called  Married to Rock. “You’ll like it,” she said, “it’s about rock stars and their wives.” She then proceeded to tell me she liked the most outrageous, big-boobed wife on the show. “The other wives make fun of her, but she’s got a cute personality,” my friend said.  “Uh-huh,” I responded, visualizing the wife of some third-tier metal guy or a bimbo married to a guy from a bland and allegedly popular group like Nickelback or The Fray. “So who are the rock stars?” I asked, disinterested.  She then managed to remember one of the names – Steve Stevens. “He is Billy Idol’s guitarist,” I said, dumbfounded. Upon further interrogation, I discovered that the rest of the cast consisted of  Duff McKagan (Guns ‘N’ Roses, Velvet Revolver) and his wife Susan, an ex-model and swimwear designer, Perry Farrell (Jane’s Addiction) and his wife Etty, one of  the band’s former backup dancers,  Steve Stevens and his wife Josie (the aforementioned big-boobed wife with a cute personality) and most perplexing to me, Billy Duffy of the Cult and his girlfriend, a VIP hostess named AJ Celi. (I’m a big Cult fan, and I always got the impression Billy was a guy who wanted to keep his offstage life private). None of these couples seemed to fulfill the normal “brain-dead and obnoxious” template for reality show couples. My curiosity piqued, I checked out some highlights.
-Josie has a “love doll” made of herself and sends it to Steve on tour.
-  AJ attempts to cook dinner for Billy (with her Dad’s assistance) and fails miserably.
-  Etty auditions dancers to find her replacement for the Jane’s Addiction tour.
-   The girls take Susan to Trashy Lingerie to get her to dress sluttier.
Not exactly the A-1 primo catfights we’ve come to expect from reality TV housewives. I actually found all the couples to be likable, which doesn’t normally guarantee ratings gold for reality shows. Since the show debuted on E! in early November, the full verdict isn’t in on ratings and viewer commentary yet. However, I rather like the fact that a group of reality show women are portrayed as friends more than “frenemies” to be refreshing.
Married To Rock on E! Entertainment Television
Posted by JadeB at 6:45 PM 1 comment: 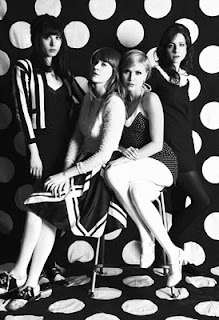 I first saw  L.A. girlgroup The Like perform at a Christmas shindig thrown by Indie 1031 in 2005 . At that time, their songs were well-constructed and had catchy melodies, but there wasn’t much else to distinguish them from the crop of  indie-pop bands battling for airplay in the mid-2000s.

The Like‘s first CD  Are You Thinking What I’m Thinking? gained some airplay on Indie1031 and other alt-rock outlets. The female trio consisted of singer Z Berg , drummer Tennessee Thomas  and original bass player Charlotte Froom. Rock critics made a point of noting that the young women, barely out of their teens,, were the daughters of music industry bigwigs. Their paternal connections may have helped the band get their bearings, but their songs proved they had the raw talent to make it on their own.

Five years have passed and the band has reinvented itself. Bassist Charlotte Froom left, and was replaced by Laena Geronimo. They bulked up their sound by adding organ player Annie Monroe. The line-up changes aren’t the only difference. On the Like’s second album, Release Me,  the band has turned things up to 11 and redefined their mission by implementing a retro 60s pop sound. It comes complete with pitch-perfect Ronettes’ harmonies, Vox organ flourishes, and feisty lyrics about cheating boyfriends and one-night stands.

Producer Mark Ronson, who guided Amy Winehouse to success on Back to Black, helped transform The Like from a so-so alt-pop band to a gutsy garage-rock outfit. Think of an updated, all-female version of the Easybeats or the Zombies. The lyrics on Release Me, much like the lyrics on Winehouse’s  Back in Black show a maturity unusual for the frothy four minute mod pop. From “Narcissus in a Red Dress" - “One minute, she's your best friend/Then you watch her take your place/I guess that taught them all the same/You clever little charlatans/Ambition gleams in overdrive”

Songs run the gamut from the gauzy arrangement of “Narcissus in a Red Dress” to the roaring, Donnas-influenced rock of “Wishing He Was Dead.” “Why When Love is Gone” sounds like a soulful Dusty Springfield number, with a sturdy but subtle rhythm section guilelessly carrying the song.

Release Me packs a retro 60s Mod punch, but the band also delivers live. Clips of their show from the Institute of Contemporary Arts in London demonstrate a newfound onstage confidence. Z Berg now has her own take on the sassy rock ‘n’ roll girl who don’t take no b.s. With her short blonde bob, eyeliner and heavy fake eyelashes she mimics “60s model Twiggy, but her vocals are part Shangri-La attitude, part smooth Bangles-era Susanna Hoffs.

Drummer Tennessee Thomas provides the vigorous backbeat, and has a blast doing it..the girls have matured and added the right touches to their initial indie-pop formula, spicing it up with Vox organ, girl-group harmonies and grown-up storylines. And they’ve traded Are You Thinking’s  PG-rated version of kinderwhore waif dresses to geometric print mini-dresses completing the transition from alt-pop princesses to retro-60s rock divas.