Unearthed Musical Memories: Why Can’t I Touch You? by Ronnie Dyson 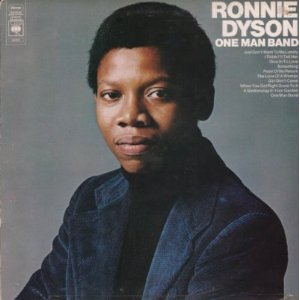 Forget about the user posts and comments on Twitter, Facebook, LinkedIn and Google Plus unless you want to read about someone’s lunch, self-published book or horrible ex-boyfriend. YouTube is the best social media site for finding more than an occasional literate or heartfelt comment. Sure, there are political comments and spam scattered underneath most YouTube videos , but some of the comments underneath  many  music videos/ uploads  of songs from the 1950s  through the 1980s are rather touching and heartfelt. You’ll often see a comment not about the song, but the memories it evokes for the listener. -of brothers and sisters and parents who passed away, or dedications to a lost or unrequited love from 30 years ago. It’s amazing  how raw and honest some people become when using a silly YouTube screen name.

I guess we all have songs that we haven’t heard since we were kids and  have totally forgotten about   – once we rediscover them, they pique  memories of  old classmates, the head shop at the local mall, or the seashells  on Grandma's  tchotchke shelf.


If You Let Me Make Love to You (Why Can’t I Touch You), a hit for soul singer Ronnie Dyson in 1970, awakens dormant memories for me - memories of buying Blue Moon ice cream at Zayre, setting off sparklers and Roman Candles on the front lawn on the Fourth of July,   going to Santa’s Village on summer Sundays with my parents and brothers. I remember hearing Why Can’t I Touch You over and over on my three favorite radio stations - WCFL 1000 and WLS 890  on the AM dial, with soul station WGRT  in the middle. Sometimes the stations would bleed into each others, the songs commingling til I  adjusted the dial to make the best song come in clearly. There were so many good songs on AM radio in the early ‘70s, I was constantly flipping from station to station every two minutes to find an even better song than the one I was currently listening to – a symptom of musical ADHD. Why Can't I Touch You?, with it's whirling rhythm and dash of marimba, was danceable but bittersweet, and it sounded so good crackling out of a red plastic transistor radio.

At 17, Ronnie Dyson was cast in the lead part in the original Broadway  production of Hair. sharing the stage with  Paul Jabara and,Melba Moore, among others.  After his success in Hair, Dyson signed with Columbia Records , working with producer Thom Bell (Spinners, Stylistics). Dyson’s smooth, tenor voice had hint of vulnerability,  and Why Can’t I Touch You?, adapted from the off-Broadway musical Salvation, hit #8 on the Billboard Top 100 charts in 1970.

A string of lesser hits followed Why Can’t I Touch You? Dyson  reached #28 on the pop charts with 1973’s One Man Band (Plays All Alone), from the album One Man Band. It contained some of Dyson’s best work, including When You Get Right Down to It  and Just Don’t Wanna Be Lonely. Dyson’s version of Just Don’t Wanna Be Lonely  reached #30 on the Billboard R and B charts, in 1973. (Main Ingredient‘s version charted at #8 in 1974.)

Dyson’s songs fused  the upbeat sound of commercial R and B with  dreamy pop feel of  artists like Johnny Mathis, but  he never attained the success he deserved. The R and B field in the early ‘70s, was crowded with  memorable acts. You had Al Wilson, Al Green Lou Rawls Clarence Carter, Brook Benton, Billy Paul and vocal groups including the O‘Jays, Blue Magic, Harold Melvin and the Blue Notes, Delfonics, Chairmen of the Board, etc., so it’s not surprising Dyson’s music got lost in the mix.