"Rock music pays off. Rock music takes me on a joyride. Rock music keeps me off the hell city bus. Rock music will always look out for me. But I will not let my torture profanity demon shoot it down." - Wesley Willis 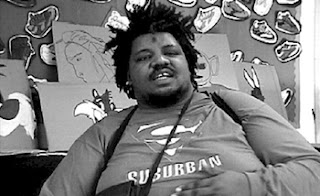 What is it about Chicago and outsider music?  Is it the cold weather, the highly segregated neighborhoods and the corrupt politicians that make it ripe for such off-the wall creativity?  Regardless of the reason, it’s interesting to note that two of the most-mentioned outsider musicians  are from the Windy City

The late Wesley Willis, a diagnosed schizophrenic, recorded a plethora of CDs. Despite,or perhaps because of, his condition, he was wildly prolific.  Willis recorded hundreds of songs, both solo and with his band, the Wesley Willis Fiasco. With a blend of humor, obscenity and surreal scenarios, reciting the song titles alone can provide a nighttime of entertainment. (Mustard Plug, Mr. Magoo Goes to Jail) Now, the uninitiated  first comment on Willis' music might be "So, it's  a crazy guy's rantings set to music?” Well, Willis songs might be just as bizarre, but they’re hilarious and have a honesty that charms as often as it shocks. Willis played all his solo songs on a Technics keyboard, reciting odes to movie stars, friends, rock bands, airlines, and  animal’s sexual organs.

His songs were in part, a way to exorcise the demons of his mental illness. Born to a drug addict mother on Chicago’s South Side, Willis overcame his dour background and became an indie music star in 1990s’ Chicago. After being diagnosed with schizophrenia at the age of 27, Willis immersed himself in drawing to battle the voices in his head. He called his psychotic experiences “Hell rides” and rock ‘n’ roll became the way to combat these episodes.

Initially discovered by local bohemian crowd for his artwork, his friends persuaded him to focus his muse/demons on music, and he eventually recorded over 50 CDS for Oglio, Alternative Tentacles and other small labels. American Recordings signed him to a major label deal in 1996, near the end of the alt-rock craze. The albums sold poorly, but Willis continued to record and develop a cult following.  Most of the songs are pretty much identical, musically speaking, and many of the lyrics have a fill in the template kind of feel. In this clip from the Howard Stern show, the lyrics to Willis’ homage to Baba Booey is basically the same as the one to Howard.

His infectious songs will make you burst out laughing. My favorite Willis song “Rock and Roll McDonalds” contains the deadpan recitation “McDonald's sells quarter pounders/ They will put pounds on you.” The un-ironic, plain speak delivery makes it even funnier. (Note: Rock and Roll McDonald's is a real place in Chicago’s trendy River North. The restaurant is decorated with pictures of Elvis and other stars.)

As the Daddy of Rock ‘N’ Roll documentary shows, Willis was kind of a scary looking figure at first sight. At  6 feet, 5 inches tall and  300 pounds,he often wore mismatched sweatpants and shirts and went shoeless. Add wild, ratty  hair and crooked teeth to this ensemble and,  yeah, you  could mistake him for a scary homeless guy.  He usually turned out to be quite a sweetheart when his torture hellride demons weren’t getting to him, that is. He wrote his lyrics on a computer at Kinkos, rode city buses, and hung out with  a tight-knit group of friends and musicians.

Check out Loved Like a Milkshake: A Tribute to Wesley Willis at Archive.org. , with cover versions of his tributes to Alanis Morrisette and Arnold Schwarzenegger. Memorable titles include I Smoke Weed and Suck a Cheetah’s Dick (many Willis songs dealt with similar subjects, just change name of animal and body part) and My Keyboard Got Damaged.  Willis died of leukemia in 2003 at age 40. We miss you, big guy!

If Willis was the city’s idea of an outsider musician, Jan Terri is white suburbia’s version. Full Disclosure: I went to college with Terri, and even visited her at her Mom’s house once to write a song. Sad to say, the tune was never finished. It wasn’t until someone posted a video of  Losing You on Facebook that I realized she still existed. One quick glance at the video and I knew it was the same girl I’d gone to school with - there’s no mistaking her one of a kind physical appearance. Her music videos were notable in a cheesy, Rebecca Black “Friday” way. Of course, a lot of people post self-produced efforts on YouTube, despite their apparent lack of talent or production values. But Terri’s videos had that extra “something” that turned her into an Internet meme.  What Terri lacked in conventional talent, she made up in chutzpah.  She hawked her homemade music videos to biz people in the ‘90s. Not surprisingly, Marilyn Manson took notice and hired Terri as an opening act for one of his Chicago concerts in 1999.

Like Willis, a certain segment of the hipster population has taken to Terri, perhaps overthinking her persona, as in this article.  Terri is currently recording and planning a comeback for the digital age.
Posted by JadeB at 2:24 PM No comments: