You Can't Get It On DVD-Blue Collar 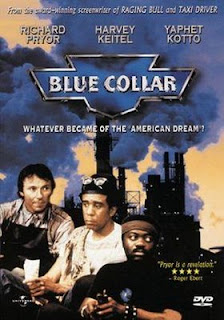 Paul Schrader’s Blue Collar, a 1978 film about down on their luck autoworkers and corrupt unions, has gotten lost amid all of the writer/director’s other efforts (Raging Bull, Taxi Driver, Affliction, Hardcore, The Comfort of Strangers, etc.). Like Schrader’s other films, Blue Collar is lucid, powerful and depressing--almost too “real” for its own good. We all know work sucks, but in Blue Collar, it's soul-battering and ugly. The bosses at a Checker Cab plant in Detroit treat workers like dirt; their union doesn’t help them much, either. But money woes are the straw that breaks the camel’s back for the film’s protagonists--Jerry (Harvey Keitel) needs to buy his daughter braces , Zeke (Richard Pryor) is in trouble with the IRS, and Smokey (Yaphet Kotto) owes money to a loan shark. Pryor gives a riveting performance as opinionated loudmouth Zeke. He tells off his union rep about a broken locker and that comment snowballs into a scheme that gets the three friends in serious trouble. During a night hanging out with prostitutes at Smokey’s pad, they concoct a plan to steal money from the local union headquarters. The burglary scores only a few hundred dollars but the friends find an incriminating ledger full of high interest loans the union has made. The auto union announces the theft, claiming the amount stolen as $10,000 to collect on insurance. The trio attempts to blackmail union officials, but they’re ill-prepared for the Machiavellian twists and turns that come next. They find themselves caught in a web of pissed off FBI agents, union reps and police. What began as a simple theft turns into a deadly game that turns the friends’ lives upside down and pits them against each other in a every man for himself scenario. Zeke’s the only one who survives the web of deceit by turning into the type of person he detested at the beginning of the film. The film got good reviews, but languished at the box office. Richard Pryor’s star turn confused some people. In the late 1970s, Pryor was at the top of his game as a comedian, and a major dramatic role in a downbeat film didn’t fit in with his irreverent stand-up persona. A few moviegoers probably walked into the theater expecting a foul-mouthed comedy and got a morality tale filled with dirty words instead. Blue Collar boasts solid performances and a script that may be too heavy-handed for some tastes. Screenwriter Paul Schrader also directed this film, and he has said in interviews that the film’s stars fought behind the scenes during production, and Schrader himself seems to have disavowed the film. It was released on DVD by Anchor Bay in 2000, but has been “discontinued by the manufacturer”, according to Amazon.com. Why it’s currently unavailable on DVD is anybody’s guess. Ownership issues? Too controversial? Lackluster sales?
Posted by JadeB at 11:19 PM No comments: