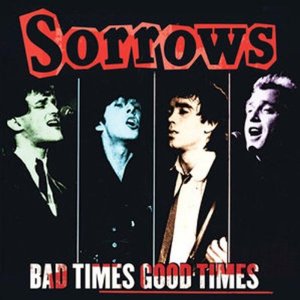 After the demise of the Beatles-influenced Poppees in 1976, the band’s guitar player Arthur Alexander and drummer Jett Harris formed a new band, Sorrows (just “Sorrows, no “the”) , which ratcheted the Poppees sound up to 11 by adding a power pop feel and a tougher guitar riffs. The new band featured Alexander on vocals and guitar, Harris on drums, Joey Cola on guitar and vocals, and Ricky Street on bass and vocals. They were signed to CBS/Pavilion Records in 1979, near the height of power pop mania.

Sorrows music is fun guitar pop with an edge, totally in kinship with other power pop bands  like The Beat and 20/20, but they have more of a rock edge ala the Flamin Groovies. As far as music biz lore goes, Sorrows have a lot more in common with early power pop brethren Blue Ash. Both bands were undervalued by their record company and dropped from the label after their second album.

Luckily, in 2010, artists don’t need to depend on nearsighted record executives to market their music to the masses. Keep in mind, Bad Times Good Times consists of previously unreleased songs, not a repackaging of their CBS albums. When the band broke up, vinyl copies of Teenage Heartbreak and Love Too Late became collectors’ items, as CBS never released the albums as CDs. This turned out to be a blessing in disguise. Armed with original demos and some unreleased tracks (some of them saved from a dumpster outside NYC’s MediaSound Studios). Alexander went into a L.A. studio and reworked the songs. Bad Times Good Times (Bomp Records), a collection of 14 studio songs and two live tunes, was the result.

The title track kicks off the album with a raucous guitar, followed by the foot-tappin, power pop melody of Can’t You Tell a Lie. The song has a layer of hard-edged, twangy guitar underneath. This effortless combination of power pop, pure rock ‘n’ roll guitar and punk attitude fused together gives Sorrows music a raunchy edge many skinny tie bands lacked, and it’s evident throughout the CD. Can’t Go Back shakes and bakes crystal-clear harmonies with jangly guitar and infectious melody. The frenetic rockabilly of That’s Your Problem quickens the pace. She Comes and Goes , the lone “slow” ballad (well except for a soaring, arena rock worthy bridge) is, about a melancholy lost girl who lives to go to rock shows A cello interlude by Jisoo Ok adds a lovely touch to the proceedings.

In the liner notes Barry Dreyfus describes one of the band’s sets at CBGB’s as a “total sonic assault.” The two live songs on Bad Times, Good Times verify that. A cover of the Stones "Off The Hook" adapts a rockabilly twang at the start and veers into straight-out rock. Carole King’s "Chains" becomes a ballsy, cathartic rocker.

Alexander has said that Sorrows’ music is like “Abba meets the Sex Pistols”. That concept may first strike you as an oxymoron, but when you hear Bad Times Good Times, you’ll realize it’s absolutely plausible, and it makes for some boisterous - and timeless - power pop songs.