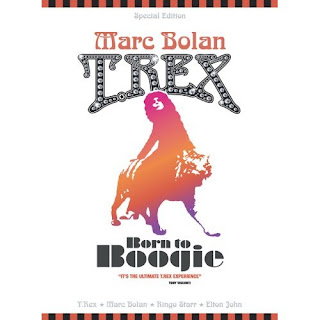 Marc Bolan of T-Rex was one of the few artists that can be termed both a flash in the pan and a legend. In one sense, T-Rex could be called a flash in the pan because T-Rextasy, as it was called in England, lasted only a few years, 1971 to 1973, and then the band's status dropped dramatically in the mid-70s. being the banner years for leader Marc Bolan. But T-Rex's popularity has grown steadily since then. Bolan has become an icon and an influence to countless musicians and new fans in the years since his untimely death in 1978. During T-Rex's heyday, Bolan's mere presence inspired the sort of frenzy not seen since the Beatles. One of Bolan's most famous fans during this time was Ringo Starr, who bonded with the curly-haired star and eventually directed and produced Born To Boogie, the chronicle of two defining shows T-Rex played at Wembly Empire Pool in 1972.

Born To Boogie, the movie, runs 64 minutes with numbers from the early show at Wembly interspersed with rollicking studio performances and surrealistic vignettes. Bolan takes the stage at Wembly, the place erupts in a hail of screams. Sleek and strutting in green pants and ivory jacket, Bolan plays the arrogant, impish rock god to the hilt. Girls scream, boys rush the stage. Percussionist Micky Finn, drummer Bill Legend and bassist Steve Curry complement their flashy singer. Even during performances filmed in the recording studio, the ebullient Bolan hams it up like he's playing to a screaming crowd during a rendition of Tutti-Frutti. Elton John plays piano in the studio numbers, smirking away as Marc's head floats mid-piano during a rendition of Children Of The Revolution. During a scene where a car drives onto a field with Ringo in a rodent suit - and a maniacal midget biting into the car mirror. This was filmed way before Ozzy made it de rigueur to feature a "little person" in rock videos. Mustachioed men in nun's habits join the band at a "Mad Hatters" tea party officiated by an English actor who starred in a TV series known as "Catweasal." These scenes were surrealistic and weird for the sake of being weird in that post-hippie, Apple Films kinda way in 1972; now, they're endearingly cheesy. The refurbished print is crisp and clear with no tell-tale signs of wear. This is amazing considering that the footage was culled from over 272 canisters of film that languished in storage for over 30 years.

The cache of extras is enough to keep a viewer occupied for hours. There are two complete Wembly concerts, a black and white Tyrannous Rex performance featuring a hippie, pre-glam Marc and percussionist Steve Peregine Took in a London club. This segment is introduced by John Peel. Legendary DJ Peel was one of Bolan's biggest fans from the beginning. Producer Tony Visconti and "Old Grey Whistle Test" host Bob Harris are interviewed by Marc's son Rolan. (That's right - Rolan Bolan.) While the interviews reveal a few details about Bolan's legacy, we don't get a fully rounded view of the phenomenon, as there are no interviews with journalists or with Bolan himself.