Book Review: Queen: The Ultimate Illustrated History of the Crown Kings of Rock by Phil Sutcliffe 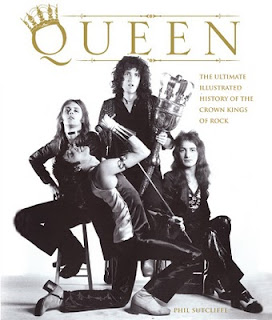 I’m so old I heard "Bohemian Rhapsody" when it was first released. I’d cut school on a frigid winter day in January and kept the radio on low so the neighbors wouldn’t know I was home and report me to the truant officer. Anyhow, when I heard the song I was stunned. “This is amazing. I can’t believe they’re playing this on the radio!” I thought.Then I first saw Queen at the Chicago Stadium on the Jazz tour in 1978. It was a revelation. Freddie commanded the stage in his leather jacket and biker cap. He performed an an acoustic set with Brian May featuring “39” (one of my fave Queen songs), and then the entire band rocked out on "Fat Bottomed Girls" and "Get Down, Make Love” Sigh. Those were the days! Reading Queen The Ultimate Illustrated History of the Crown Kings of Rock by Phil Sutcliffe piqued these memories.


Freelance journalist Sutcliffe compiled a plethora of old photos (some never before published), memorabilia, and both published and original interviews to fill up this lush, 300-page biography of Queen. The author also enlists the help of fellow journalists to offer their reviews and memories of  Queen’s albums. Jim DeRogatis remembers Jazz, Greg Kot reviews Sheer Heart Attack and Chuck Eddy critiques News of the World.
Musicians and rock stars from every conceivable stripe also pay homage to the band as well. Billy Squire reminisces about opening for the band on their Hot Space tour. Rob Halford talks about Freddie’s singing style; Slash about how Brian May influenced his guitar playing. The book is peppered with quotes about the band from a diverse bunch of musicians including Sammy Hagar, Brian McKnight, Kid Rock, Tom Morello and Neil Diamond.

Reinhold Mack offers many tales about working with the band (he produced several Queen albums, including The Game) and shares family pictures of his son John-Frederick with godfather Freddie Mercury. One sidebar is accompanied by a photo of a touching postcard from Freddie to his godson. Longtime Queen road manager Peter Hince recalls the recording sessions for "Crazy Little Thing Called Love,” and there are a few different recountings of the legendary meeting between Freddie and Sid Vicious.

Queen: The Illustrated History differs from many other coffee table, photo-oriented rock books because it has just the right combination of band photos, text and pictures of memorabilia-ticket stubs, backstage passes, show posters, single sleeves, and even pages from the infamous Rock ‘n’ Roll Comics are part of the package, not just filler. All sorts of Queen trivia is revealed throughout the course of the book (Brian May’s father helped design the Concorde; a man dressed as a piece of liver performed at one of Queen's notorious late ‘70s parties ). Queen: The Ultimate Illustrated History of the Crown Kings of Rock is a beautiful, impressive book that reads as good as it looks.