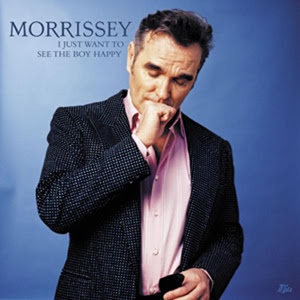 Earlier this month, Morrissey played three sold-out but barely advertised shows at the Pasadena Civic Center. Tickets were snapped up in record time by his loyal fans, per usual, with some fans attending all three nights. Well, I might be loyal, but I’m certainly not that rich (tickets were $75 a pop, plus Ticketmaster charges), so I opted for Friday night’s show.

The Pasadena Civic is a pretty classy place. If you were a character in the Mike Judge film Idiocracy, you’d say “This place is gheyer than an opera house.” Translation-it’s really nice. While waiting in line outside before the show, I met a few personable and highly dedicated Moz fans. I talked to a high school girl who had bought her pit ticket off eBay for a mere 200 bucks, and a recently engaged couple. The bridegroom to be was the Morrissey fan, and his fiancée had to adjust to this. “Do you love me as much as you love Morrissey?” she joked. “I love you more,” he said. Then they kissed. Say it with me now. “How sweet!!” All Moz fans have a backstory.

The security people were efficient and very nice. Not that you have to worry about Moz fans sneaking in illegal drugs, bacon, or switchblades. Maybe a few copies of Gertrude Stein, though. The neatly organized merchandise tables with Moz cuff links and T-shirts seemed more like a Saks Fifth Avenue counter than a cheap concert venue swag receptacle.

The auditorium was half-empty for opener Kristeen Young, a Bjork/Tori Amos hybrid without the focus. Accompanied by a drummer who looked like he had barely graduated from junior high, Young pounded on her keyboards and wailed like a soprano gone berserk. She honed her musical skills in St. Louis, then moved to New York City, where she met Tony Visconti, who produced her albums X and London Cry. (Visconti also produced Morrissey’s Ringleader of The Tormentors.) The sparse crowd heckled or ignored Young. This was unfortunate, since she was hand-picked by Morrissey to be on his Attack label and open his European tour and the Pasadena dates. You’d think his fans would be more appreciative of his choices.

Moz and band appeared after a series of 60’s Euro-pop videos played on the screen behind the stage. Moz looks just a bit older than in the M in Manchester video and was nattily attired in a brown Gucci shirt and brown pants. He walks onstage, and everyone in the crowd stands in rapt attention and stays that way for the remainder of the show. I think if someone sat down, lighting would have hit them. And I got a good view of those famous eyebrows even from the 23rd row. I have a thing for guys with EYEBROWS anyhow. (Don’t ask!)


A 2007 Moz concert bears no resemblance to riots of years past, and stage crashers are few and far between, at least at this particular show. A half dozen security guys descended on some poor bloke in a red shirt, then Moz and band left the stage, with guitarist Boz Boorer tsk-tsking someone in the audience (the guy in the red shirt, perhaps?) as they scurried backstage. The band returned for the encore, Don’t Make Fun Of Daddy’s Voice. (“something got stuck in his throat” got changed to “someone got stuck in his throat”) Moz, you are a cheeky monkey!


Songs included Please Please Please Let Me Get What I Want, William, It Was Really Nothing, show-opener Panic, (otherwise known to the uninformed as Hang The DJ), Girlfriend In A Coma and How Soon Is Now. Moz also gave a shout-out to über-fan Julia Riley and mock introduced one of the songs as Get Off The Stage, a little-known B-side written when Moz was a youngin’. The song’s lyrics criticized then 45 year old Mick Jagger for strutting his stuff. Aaah, the irony of life. Moz is now 47, and he ripped off four-count em-4 Gucci shirts and tossed ‘em to the ravenous crowd at this show. Moz has a bit of a poufy stomach, but its’ kinda cute. The guys sitting behind me, who looked like they just stumbled in from the the sports bar across the street, spent most of the night screaming for the band to play Jack The Ripper. No such luck, fellas.

Of course, the bulk of the show featured songs from the lukewarm Ringleader of the Tormentors, and luckily, these songs, which sound overproduced and self-important on the CD, have balls live. Morrissey’s current band is a far cry from the excellent outfit he had on the Quarry tour, but they gave a much-needed kick to the songs from Ringleader. Life Is A Pigsty, melodramatic orchestrated piece on the disc, becomes a feisty rock song live.

Alain Whyte, Mikey Farrell, and Gary Day are gone, leaving longtime guitarist Boz Boorer and new guitarist Jesse Tobias as the only readily identifiable members of Morrissey’s band. As great as Moz is all by his lonesome, I miss Alain, Gary and Mikey. Maybe they’ll be back. Maybe not. And let’s not even talk about Johnny Marr. That’s one reunion that ain’t happening, baby. Moz is still here, and he still has it, regardless of his back-up band. A 40 city U.S. tour will be announced shortly.