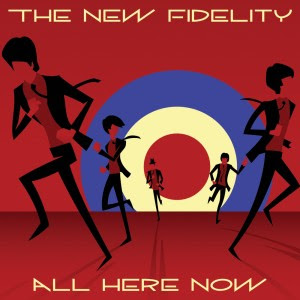 Last summer, an indie film called We Are the Mods made the rounds on the film festival circuit. The film, based on the current L.A. mod revival. Yes, there’s a Mod revival in LA-and everywhere else, musically and fashion-wise. Hey, when guys with moptop hair and Chelsea boots are spotted in plane cockpits, you know it’s no joke. (This actually happened.)  Would you want your pilot to look like Ringo a member of the Dave Clark Five?

Long Beach , Ca. based The New Fidelity appeared in a club scene in the aforementioned film, and they sure fit the part. They’ve gigged throughout Southern California regularly since the early '00s, and gained kudos from Rodney Bingenheimer and KCRW’s Nic Harcourt.  Their 2009 EP, All Here Now, brings back some of that 1960s Who & Small Faces on Shindig vibe, with liberal does of powerpop and Jam influenced punk sprinkled throughout.

The EP begins with Simple Things, a playful song about enjoying the first moments of a budding relationship. Setting Sun, with catchy keyboards throughout, echoes the harder-edged garage rock sound of Music Machine and their Swingin' 60s cohorts. The lyrics are a contemplative contrast to the music. “I don’t wanna live my life like the setting sun no more”, vocalist Dan Perkins declares. Best Time To Say Goodbye kicks off with a bouncy adrenaline rush. I instantly thought of the Wonders (aka Fountains of Wayne) and That Thing You Do. Dark Eyes is a little quieter and well, darker than the previous tunes, the love ballad on the EP, if you will. All my soul is New Fi’s stab at blue-eyed soul. Native Son, has that "driving down Sunset" feel with melody intact. The adjective “dirty” is mentioned a lot in the lyrics, but in a complimentary way. You have to be an L.A. resident to understand that. It’s a tribute to the city by someone who moves here but loves it despite its fault. “We’re all here now and this is all our home.”

All Here Now is available as a free download on the band’s website , with their previous efforts for sale on CD Baby .

New Fidelity MySpace
Posted by JadeB at 12:01 AM No comments: