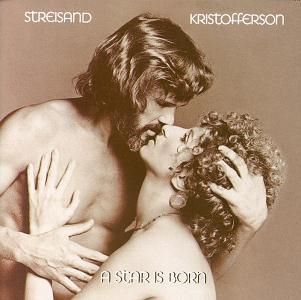 The year was 1976 - America’s Bicentennial. We had pet rocks and mood rings in the shopping mall, Charlie’s Angels on the small screen, and on the big screen at General Cinemas theater – A Star is Born, version 3, with Barbra Streisand. (Now there’s a fourth, R & B version on the table starring Beyonce slated for 2013.) The movie's soundtrack album shared time on my turntable with T-Rex, Mott the Hoople, the Sweet, the Stones and the Runaways. But then again, I'd always liked Streisand's music. Her first album is one of my favorites. Ya know, back when she wasn't so damn serious and political and she sang stuff like Come to the Supermarket in Old Peking and A Sleepin' Bee

The soundtrack's hit, Evergreen, turned out to be, well, evergreen. It was one of the five songs Williams penned for the soundtrack. He wrote tunes for many top pop icons in the mid-1970s, from the Carpenters to the Muppets. But MOR songwriting wasn’t his only skill. He fit right in with wackos Brett Somers and Charles Nelson-Reilly during a few guest appearances on the Match Game. For bonus hip cred points, he played Swan in Brian De Palma’s rock fantasy, Phantom of the Paradise, and he continues to act in guest TV and movie roles today.

Female empowerment seemed to be the underlying theme of Esther/Barbra’s songs. (Of course, in those days, it was called Women’s Lib.) These Women’s Lib lounge tunes are excellent as Broadway-style pop, but they're not particularly made for hitting the replay button. I Believe in Love (co-written by Kenny Loggins) has a fast, pumping rhythm, and the soulful, story-song, Queen Bee, gives examples of powerful women throughout history, courtesy of songwriter Rupert “Pina Colada” Holmes. Everything drives home the Superwoman point once again, with a quieter pace.

Kristofferson didn’t write any of the tunes he sang in the movie, and none of them are as memorable as Barbra’s. Onscreen, Kris looked good in a sleazy sort of way. “”His body!! Oh my God!!” my 16-year old girlfriends and I chorused when we first watched the film. Kris’ grizzled whiskey - soaked voice on Crippled Crow is too sad (sniffle sniffle) to listen to in context of the film’s plot. The opening song by the “John Norman Howard Speedway”, Watch Closely Now, sung again by Babs at the film’s end, seemed strangely out of place even with the rock arrangement. Hellacious Acres was the keeper. The song was about an amusement park with patrons like Jack the Ripper and Lizzie Borden - (“admission's free/ you pay to get out”). Written by Kenny Ascher and Paul Williams, it's a rock song placed in a blender with a show tune. The song works, but you need a quirky palate to enjoy it

Streisand's finale, With One More Look at You/Watch Closely Now is about as dramatic as a pop song can get. The way it zooms from heartbreak to despair to self-realization to confidence that borders on hubris is quite an emotional roller coaster ride. (“When they’re breaking your back/bring the last straw to me/I turn straw into gold”) This is not background music; it’s potent stuff. I tend to listen to it now only when I’m in a bottled-up emotional state and need to vent-or for creative inspiration. Barbra could always imbue even the simplest sentiment with dramatic flair; here she embellishes already powerful lyrics with her performance.

The movie accompanying the soundtrack doesn’t hold up well at all. I fast forwarded through the film recently, only stopping at the musical numbers. This was one film where the scant storyline was merely filler for the music, not the other way around.


A few interesting side notes about the film –Streisand wanted Elvis Presley to play John Norman Howard, but Colonel Tom nixed the deal; the car John Norman totals was a Ferrari GTS/4 Daytona Spyder, one of the most revered sports cars of the 1970s, and Sammy Hagar’s pre-VH band, Montrose, warmed up the Sun Devil Stadium crowd before Kris filmed a concert scene. Unsurprisingly, discord reigned supreme on the set, as director Frank Pierson didn’t get along with either of his stars. Kristofferson later noted., “Filming with Streisand is an experience which may have cured me of the movies."