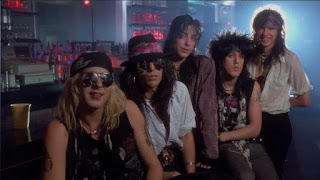 
After remaining in official release limbo for decades, The Decline of Western Civilization: Part II: The Metal Years is now available as part of a  4 DVD (or Blu Ray) set of all three Decline movies directed by Penelope Spheeris – the original documentary about L.A.’s late ‘70s punk scene, the third installment, released in 1998, about gutterpunks in Hollywood and Decline II, about 80s Sunset Strip metal (aka hair metal). The set has a fourth DVD featuring additional footage from the documentaries.

The first and third documentaries dealt with Hollywood punk rockers, homeless or otherwise, and Decline II, the trio’s red-headed stepchild, looks at the style over substance days of Sunset Strip hair metal. The documentary features stars and wanna-bes of the Sunset Strip scene, fans, DJs, club owners, and several hard rock stars from the 1970s/early 1980s.

Spheeris interviews hard rock/metal icons the younger musicians hope to emulate. A chatty, level-headed Ozzy fixes breakfast and warns fledgling bands, “Be nice to everyone on the way up, cause you’ll see them on the way down.” The L.A. skyline gleams in the background as Lemmy talks about going for your dreams. Paul Stanley lies on a bed draped with groupies. Gene Simmons is surrounded by girls in lingerie buying lingerie. Alice Cooper notes, "Punk (rock) was getting to be techno.. metal saved rock 'n' roll for the '80s." and Steve Tyler and Joe Perry talk about the millions they made and blew on cocaine. 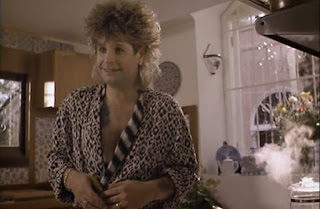 Ozzy in the kitchen

“In Miss Spheeris's earlier hell-in-a-handbasket documentary, the original ''Decline of Western Civilization'' about punk rockers, the brainpower quotient was somewhat higher than it is among heavy-metal fans. That's one reason that the new film is both so funny and so sad. For all the amusingly fatuous remarks heard here -and Miss Spheeris has a great ear for these - the overriding dimness of most of the fans and musicians is frightening.”

Giving the metal kids the benefit of the doubt, a filmmaker can spin the subject anyway he or she wants with leading questions and selective editing. Maybe there were smart kids who didn’t make the final cut or weren’t interested in being interviewed. If there were any honor students prowling the Strip circa 1987, they kept their IQs well under wraps. One of the featured bands, Seduce, seemed pretty pragmatic about the whole scene, including groupies. This earthiness didn’t translate into success or infamy. They released two albums on small labels, and are now nowhere to be found. Spheeris saves the only thrash band (and the smartest of the film's new bands) -Megadeth - for the end of the film.  Dave Mustaine may be many things, but he's no dummy. (Check out the extended interview with him in the bonus DVD.)

The newer bands have the gift of gab, but their subject matter is somewhat limited. There’s Nadir D'Priest and the band London, “the training school for rock stars” (Izzy Stradlin and Nikki Sixx, among others, went on to fame after leaving the group). They’re party monsters, but they come with a warning, as one bandmember exclaims “We are not role models for your life.” Odin, whose singer is touted as the next David Lee Roth, cavort in a hot tub with groupies, contemplating what will become of them if they don’t hit it big. Poison, whose first album was a platinum success, seem likeable and well-grounded in this early stage of their career. (The years, as we know, have not been kind.) 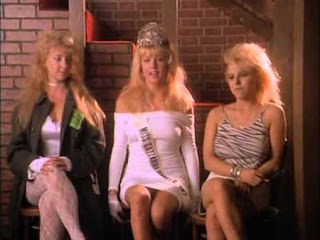 As for Decline II’s girls of the Sunset Strip, the female musicians (Vixen, Jaded Lady) are just as ambitious but not quite as dim as some of their male counterparts. The female fans are another story. The girls participating in the Gazarri Dance Contest seem happy to strip, I mean, gyrate, for the ogling hair metal judges. The reigning “Miss Gazarri” says she hopes to continue with her modeling and “actressing” after  she passes on her crown. (Christina Applegate allegedly based her Married with Children character Kelly Bundy on this aspiring thespian.)


The onstage segments with London, Lizzy Borden, Odin and Faster Pussycat make the viewer ponder “So is this is what an NC-17 Spinal Tap would look like.”  London’s singer finally lights a Soviet flag on fire after a few miscues, and the band’s political anthem, “Russian Winter” won’t put Bob Dylan or Neil Young out of business. The extra interview footage  has several X-rated revelations. (Now where was that chain hidden again?)

Decline II’s most infamous interview, with W.A.S.P. guitarist Chris Holmes, shows the dark underbelly to all the leather and studs bravado. Soused to the gills, Holmes sits in a raft in his swimming pool chugging from a bottle of vodka while his Mom looks on pool side. He jokes about groupies, being an alcoholic, and proclaims, “I’m a piece of crap.” Spheeris asks, “Think you might drink because you’re covering up pain?” “Yeah,” Chris answers, then dunks under the water, evading any self-analysis. (Watch the unedited interview on the bonus disc til the bitter end to feel really uncomfortable.) Update: Chris relocated to France and is still touring, recording, and making music videos. His latest album has the delightful title Shittin' Bricks.


It’s easy to dismiss metal bands of the ‘80s Sunset Strip based on their looks and image. Most of these bands had musical skills and could entertain an audience. Unfortunately, 90% of them didn’t do anything but blindly follow the Aqua-netted path Motley Crue had paved (and not as well). Money talks – that’s one of the differences between the metal rockers in “Decline II” and the punk rockers in “Decline I”. In the original Decline, the kids made music their way and embraced rebellion against the norm. In Decline II, it was all about fame and money.

The fans and groupies who lived the scene look back at the time fondly. To the causal observer, it was a gold mine for derision and acerbic, play by play music video commentary. After awhile, even disparaging the bands got monotonous. There wasn’t a lot of deviation from the fluffy-haired sex and partying formula, and hair metal succumbed to overexposure (and grunge) around 1991.

Highly recommended as a reminder of the “What were they thinking?” 1980s, Decline II is all sex and drugs, alcohol and ambition, with none of the cerebral or societal discourse of Decline I or III. But sometimes, as another ‘80s icon sang, girls (and boys) just wanna have fun .