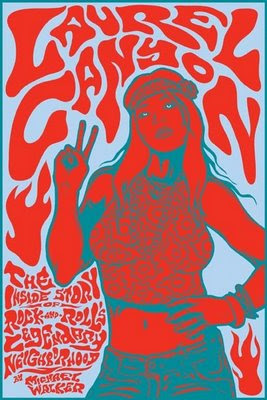 Laurel Canyon: The Inside Story of L.A.'s Legendary Rock 'and Roll Neighborhood by Michael Walker Haight Ashbury, Greenwich Village, Carnaby Street and Sunset Strip immediately evoke memories of the 1960s counterculture. Laurel Canyon remains a secondary point on L.A.’s musical roadmap as far as mainstream observers are concerned. Ironically, Laurel Canyon had more of a verifiable creative community than the more famous Sunset Strip, as evidenced by Michael Walker’s history, Laurel Canyon: The Inside Story of L.A.’s Legendary Rock ‘N’ Roll Neighborhood Walker deconstructs the history of the Canyon from its beginning as a playground for silent film stars like Tom Mix to the folkie era to the Canyon’s days as a gathering place for the crème de la crème of L.A.s 60s’ era rock ‘n’ rollers.

Morgana Welch
"Young Girls are coming to the Canyon", the Mama and Papas sang in 12:30 and they are indeed a part of the story here. Mama Cass is drawn as the earth mother of the scene, (Nash even says he doesn’t known what his life would be like if he hadn’t met her), while Michelle Phillips was the disruptive muse. Crosby, Stills, Nash and Young, Joni Mitchell, and the Byrds were some of the enclaves’s most famous residents. Frank Zappa’s abode, a cabin that once belonged to silent film star Tom Mix, became the epicenter of Laurel Canyon’s social and creative community. An endless cast of characters visited the Zappa’s, from Mick Jagger and Marianne Faithfull to the ubiquitous GTOs, and Walker recounts their exploits. Pamela and Michael Des Barres, Kim Fowley and early 70s groupie Morgana Welch, who have probably been interviewed by most L.A. journalists and documentarians about the city’s rock and glam heyday, provide most of the background. Aside from Graham Nash, most of the interview subjects are record execs and scenesters like the Des Barres and Fowley, Crosby has only a few quotes. 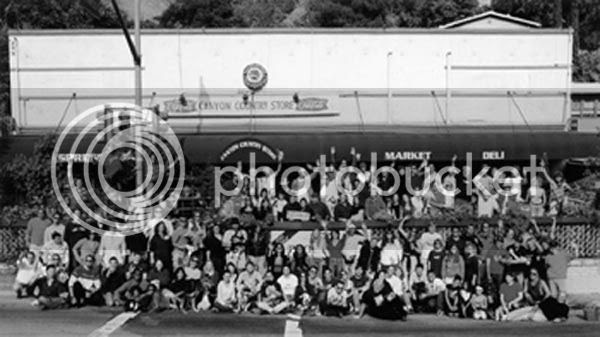 The Canyon's famous residents pose in front of the Country Store
Still, the book provides a nice overview of Laurel Canyon’s rise and fall. Not surprisingly, the community based on idealism and incense and hippie free love began to flounder after the Manson murders. The soulless, cocaine fueled excesses that followed in the mid-70s sent the artistic community into oblivion. While Laurel Canyon doesn’t deliver much in the way of new or startling information, it does serve as a good reference point for younger readers and those unfamiliar with the inner machinations of L.A. rock history.
Posted by JadeB at 9:45 PM No comments:

For Crazy Joe & the Variable Speed band. “Crazy Joe” aka Joe Renda, went on to produce the Jerky Boys. Released on Casablanca Records in the early 80s, here’s the cheesy video for this Dr. Demento fave about the hapless “Eugene,” who “sticks his hands in fans for fun”

Bang Your Head: A Fan Looks At Heavy Metal’s History 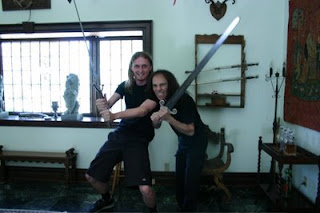 Director Sam Dunn hangs out with Ronnie James Dio
This review first appeared on Rock Confidential.com in May 2006 under my other byline, Marianne Moro.
Metal: A Headbanger's Journey, an hour and half foray into the world of heavy metal music from a fan’s point of view, screened at the American Film Institute’s Music Documentary Series at L.A.’s Arclight Theatre in 2006. Directed by Sam Dunn, a 30 year old Canadian anthropologist and metal fan, it's chock full of metal stars, near-stars, and (sometimes unintentional) humor. Even if you don't like metal music, there's plenty here to keep you amused. The director’s enthusiasm, in-depth research, and the cross-section of wacky interviewees keep you riveted. A 2-DVD version of the film is available from Warner Home Video Metal:A Headbanger’s Journey is the definitive metal documentary. It’s unusual to see a thoughtful, poignant and sometimes funny film about this much maligned genre. What’s most impressive are the charts that Dunn uses to track the various genres and subgenres. The general public’s perception that metal is one-dimensional music for dummies is disproved here. Dunn’s chart lists a dozen genres, including prog metal, death metal, pop metal, and glam. It’s not until you see the charts on the screen that you realize heavy metal has spawned and mutated into a dozen viable subgenres, each with its own distinct, sound, look and fan base. I won’t get into too much detail about the interviews themselves. The element of surprise plays a part in a few of them, and I wouldn’t want to ruin it for those planning to see the movie. We learn about the tritone, “the devil’s music” and how it was banned in medieval times and later incorporated into metal. The stars range from Bruce Dickinson, Tony Iommi, Rob Zombie, Alice Cooper, members of Slipknot and Lamb of God and the infamous Norwegian satanic metal bands, to Lemmy, Geddy Lee, and Ronnie James Dio. Ronnie offers several good-natured digs at Gene Simmons and explains how he adapted the devil’s horn symbol from his Grandma!! Angela Gossow, the first female vocalist to adapt the Cookie Monster growl, Doro, and members of Girlschool & Kittie round out the female contingent. The hair metal section is mercifully brief. We get an interview with Vince Neil and a KNAC guy commenting on the groupie scene of the time. Professor Deena Weinstein and rock crit Chuck Klosterman provide academic explanations of metal’s popularity. Klosterman, the author of Fargo Rock City :A Heavy Metal Odyssey in Rural North Dakota, bears a slight resemblance to Austin (Yeah, Baby) Powers, and has an infectious enthusiasm for metal that matches Dunn’s. Tom Araya of Slayer gets in the best quote of the movie regarding “God Hates Us All.” And this being metal there are a few unintentionally funny, Spinal Tap-ish moments, courtesy of the Waken Open Air Festival in Germany and the Norwegian black metal groups. The film features quite a cast of characters. I kept waiting to hear from Marilyn Manson, but he wasn’t included. Seems to me he would be a good addition to any discussion about music and evil. Maybe he wasn’t metal enough, who knows? Dunn even talks to a violence researcher about death metal band Cannibal Corpse. For those who don’t know, Cannibal Corpse album covers are low-rent Hieronymus Bosch parodies, with lots of cartoon blood, exploding flesh and skeletons. Aside--when I reviewed music back in NYC, Roadrunner Records sent me postcards with CC’s album covers on them. The music director of the company I worked for, a born-again Christian, would always very discreetly turn them face down when putting them on my desk. No documentary on heavy metal would be complete without a clip of Dee Snider testifying before the senate committee on “dirty” rock lyrics? Snider is a pretty sharp guy, despite his outlandish onstage persona, and Dunn’s interview with him proves this. The metalhead audience in attendance booed heartily when Tipper Gore appeared on the screen. That whole “Washington Wives” fiasco now seems like a bad SNL skit. Amazing how all the PMRC nitpicking about heavy metal has really helped eliminate “naughty” lyrics. Yeah, right. Now we have hardcore rap at the top of the charts, with lyrics that are eons worse than anything Twisted Sister could envision. By the way, you'll never guess who refused to be interviewed for the film-err-who wouldn’t let her husband be interviewed... Official site: Headbangers Journey Dunn also directed the documentary Global Metal
Posted by JadeB at 4:24 PM 1 comment: