Amy Winehouse : After the Tabloid Headlines and Rehab Jokes Have Ended, the Music Remains 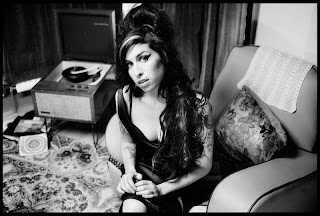 I had no idea who Amy Winehouse was in 2006 when I first heard Me and Mr. Jones. I'd somehow missed all the press about her beatification as music's new "It" girl, and the song mystified me. Was this some obscure treasure by a ‘60s girl group, a quirky jazz/indie performance piece or tongue-in cheek R & B by a seasoned artist? I never would have guessed a 22-year old white girl from Southgate, London was responsible for that smoky, commanding contralto voice. Of course, if I’d listened more closely to the lyrics, which mentioned “Slick Rick” and “fuckery”, maybe the singer’s age wouldn’t have been such a surprise to me.

As I listened to more of her work-and her songs were everywhere in 2006 and 2007- the maturity and artistry of her delivery and lyrics continued to amaze me. How could a woman in her early 20s sound so genuinely, from-the-guts bluesy and world-weary on Love is a Losing Game and offer the casually ironic wit of Fuck Me Pumps, an observational song about English “footballer” groupies. The subtle delivery of Fuck Me Pumps  (from Winehouse's first album, Frank) doesn’t seem like one dished out by a 20-year old. One would expect an angry, hip hop denunciation of bitches and hos from someone so young, but Winehouse’s smirky expose disses said women more effectively than any acidic diatribe ever could.

Tears Dry on Their Own is at once a recollection of a bittersweet, illicit love affair and a declaration of feminist freedom. “I cannot play myself again/ I should just be my own best friend/not fuck myself in the head with stupid men,” Winehouse declares in one verse. Valerie Simpson and Nicholas Ashford co-wrote Tears Dry on Their Own, but Winehouse owns the song with the honesty and directness of her vocals. The presentation exposes the raw complications of love and psychoanalyzes it at the same time. The song Back to Black played out like an updated version of jazz standards like Black Coffee and Cigarettes, where the screeching anguish of lost love has descended into a dull, consistent ache.

The constant barrage of photos and video clips of Ms. Winehouse over the last few years exposed her as a cracked-out, bloody mess, running barefoot and disoriented in the middle of the street, ostensibly snorting coke onstage and generally being an out-of-control rock star. At first it seemed like a bad joke. Was she portraying the Saturday Night Live character Candy Slice run amuck?  After awhile, it became apparent that this was no laughing matter.  Unlike other members of the 27 Club, who muddled through highs and lows for several years before succumbing to the dark side, Amy just ceased to exist as a performer and musician one day and morphed into a permanent train wreck

I’m not a doctor (and I never played on TV), but copious amounts of alcohol, crack, heroin and whatever else the girl was shooting/snorting/imbibing on a regular basis was enough to kill not just a horse, but a whole stable. The holier-than-thou notion that most people can “snap out of it” after years of intense drug and alcohol abuse is a misnomer; we’re all wired differently and most people can’t just pick themselves up and walk away after a certain point. Given the amount and longevity of Winehouse’s drug and alcohol abuse, it seemed the light at the end of the tunnel was, indeed, farther than she could navigate.

If Amy had overcome her demons, it surely would have given her a wealth of material to match or outdo Back to Black. If she sounded like a jazz singer in some smoky nightclub at 22, can you imagine what she would have created at 35 or 40? She certainly had the talent and the raw chutzpah to become the Billie Holiday of her generation. It’s too bad she left us before she had the chance to generate an extensive body of work.