From the Masque and other punk rock clubs in the late 1970s and early 1980s to the hair metal Sunset Strip scene , L.A. has always been home to many lively and influential music clubs. Some, like the Masque and Rodney Bingenheimer’s English Disco, have made it into rock history books while others are highlighted only in former patrons’ memories (and on their Facebook pages). The Los Angeles club scene circa 2011 may not have the flash and finesse of years past, but a handful of local musicians and promoters are striving to recharge the current L.A. club scene. Asia Muka, the creator of Hollywood’s Club Romper Stomper, is one of them.
A monthly celebration of the crème de la crème of the L.A. rock scene, Romper Stomper features true rock and roll bands that carry on the tradition of garage, mod, punk and glitter bands from the past. Romper Stomper performers have included the Ruby Friedman Orchestra, Vicky and the Vengents and the Woolly Bandits. Asia is devoted to introducing nitty-gritty rock and roll to a wider audience. “I want to do my part in spreading the message of inspiration through the power of music. I know that may sound a ‘lil hippie hippie shake,but it is something I feel strongly about… A few times when I was working with some 20 year olds, I made them a compilation CD. A wild mix of stuff from the 1920's up until the 70's punk era, including soul, mod, etc.  Anyway, these kids had no idea this music existed and were completely blown away.  It was truly a musical mind opener for them...and me!" 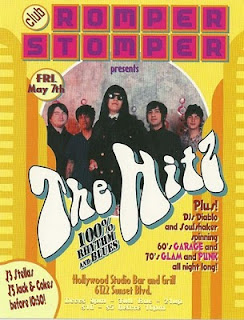 Romper Stomper made its debut in May 2010 at the Sunset Bar and Grill in Hollywood with headliners the Hitz out of West Covina. Says Asia, “I really liked their energy and wanted other people to know about them. I kind of took a huge gamble and did not book any other bands! I gave the whole night to The Hitz!  And promoted the hell out of the show (as i do every show).  I was really surprised that for a Friday night we had a great crowd!”
Legendary KROQ  DJ Rodney Bingenheimer  has co-hosted several Romper Stomper events, including a recent show with local glam faves Prima Donna and the female-fronted punk of Barb Wire Dolls (a band that recently relocated to L.A. from Greece.) Asia elaborates on her association with Rodney. ” I met Rodney when I was working on the Runaways movie. (Asia was a costumer for the film.)  I have always admired Rodney for taking a stand in the RNR world.  Once we became good friends, I talked him into letting me organize a night in honor of him,, including bands the he is currently playing on his show.  He does his show every Sunday at Midnight until 3am on KROQ. And that is a hard hour! But I think if more kids took Mondays off from school then they could be injected with some serious musical knowledge , something they may need as they are searching for direction in this chaotic world.” 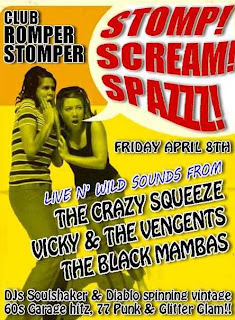 Romper Stomper shows have lots of visual and auditory stimulation above and beyond live bands. The club’s walls serve as a screen for clips of T-Rex and other glam and punk bands. There’s a dance floor full of 20something kids imitating the original Rodney’s English Disco vibe and a DJ spinning a mixture of garage, glam and punk tunes. “I try to create an "experience" when doing these shows, Asia notes, “and make it well known that it's perfectly okay to live the life you believe in.  There are a lot of things happening in L.A., you just have to search for them.  But when I can't find them I create them!
The next Club Romper Stomper is Friday April 8th at the Sunset Bar and Grill with the Crazy Squeeze, Vicky and The Vengents and the Black Mambas.
Posted by JadeB at 8:30 PM No comments: