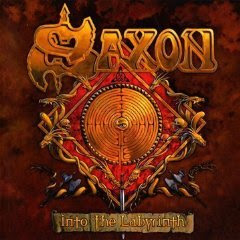 Saxon’s Into the Labyrinth is brewed with the same formula that’s established them as as one of the “New Wave of Heavy Metal” bands that dominated UK metal in the early 1980s, along with Iron Maiden, Diamond Head, Tygers of Pan Tang and Girlschool, among others. Saxon have remained a steady fixture on the UK and European metal scene since then. One of their early albums was called “Denim and Leather” and that’s a good way to categorize their audience and their sound. Technically speaking, though, Into the Labyrinth's combination of unpretentious anthems like “Live to Rock ” and sinister operatic sagas like “Demon Sweeny Todd” are more for the earthy denim crowd than leather-clad types. Vocalist Biff Byford has a powerful voice that would command your attention even if he sang about gum wrappers blowing across the lawn. He’s in the same league as Halford, Bruce Dickinson, and Ronnie James Dio. In their 32 year history, Saxon did veer off to pop metal for awhile, but quickly regained their senses and returned to their signature sound.

Into the Labyrinth covers all the arena rock/operatic rock/bluesy basics that dominated metal in the early days. There’s nothing groundbreaking here, but that’s not the point. It’s all about taking a tried and true approach and making it better, faster and stronger. The CD opener “Battalions of Steel” begins with an ominous rumble and soaring anthemic chorus, then escalates with Biff Byford’s soaring vocals. His pipes are in great form, no wear and tear here. “Live to Rock” is self-explanatory, and perfect for head banging kids in the front row feigning air guitar “Valley of the Kings” traverses the same territory as Maiden’s “Run to the Hills”. Byford and guitarist Paul Quinn continue to produce the quality evergreen metal on Into the Labyrinth that defies trends and gives the true fan something to sink their teeth into-over and over again. If it ain’t broke, don’t fix it.