Heavy Metal And Its Culture: Interview With Deena Weinstein 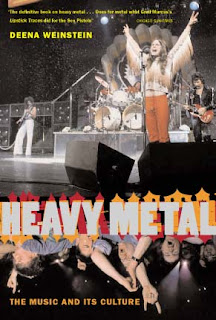 Deena Weinstein, a professor of sociology at DePaul University in Chicago, is the author of Heavy Metal: The Music and Its Culture and Heavy Metal: A Cultural Sociology as well as numerous zine articles about the subject.

Weinstein first discovered heavy metal music in the 1980s and has been one of the most vocal metal music writers and experts since then, along with Fargo Rock City author Chuck Klosterman, Martin Popoff and Chuck Eddy. This is a reprint of an interview I conducted with Professor Weinstein on May 13, 2005.
JB-How did you come to write the book Heavy Metal and Its Culture?

DW-There were some idiots running around--politicians and politicians’ wives like Tipper Gore saying the most stupid things in the world. They didn’t know what they were talking about. I’d been to a whole number of concerts by then and I thought someone ought to set the record straight, and then I realized none of the metal people could do it. They were already demonized by these politicians and I thought I better do something.
JB- How did you conduct your research?

DW-I attended lot of concerts, and did a lot of interviewing, waiting on line for four hours in 13 degrees for a Slayer concert. That’s a great place to speak to metal fans so that they see you are in the same predicament as they are and you know about the music and care about the music, so they spoke to me at great length.

JB-Did you discover anything surprising about the music or the fans in your research?

DW-Now that I think of it. They were sweetest people in the world. From an outsider’s point of view, they looked rather menacing. but on the topic of metal they just melted to be the nicest most charming people in the universe. So I mean I got to be grand friends with loads of them.

JB-What bands or metal sub-genres do you enjoy?

Late 80s when I was doing all the research, thrash metal my very favorite, I like death and black. There's doom metal like Trouble that I still adore. There are examples of all of it that I really like.

DW-Good or bad it doesn’t do anything for me. Nu metal, especially things like Korn, had a lot more to do with grunge music than metal

JB-What was the first band could call heavy metal?

DW-Obviously, Sabbath put down a number of moves that others could improve upon. But the band that had all of the verbal and sonic elements of metal was Judas Priest’s second album. Their first album Rocka Rolla was not metal at all. Sad Wings Of Destiny had all of the moves that anyone could consider metal. What do you think? (the first metal album was)

JB- Some of the late ‘60s psychedelic bands had a pretty metal sound, like Vanilla Fudge when they did “You Keep Me Hangin On.” Is that more hard rock though?


DW- There’s no supreme court of metal. I had to explain to the guy who first used the term heavy metal in print that he was the first guy to use it in print. All the idiot writers say it was Lester and I went through all of Lester Bangs’ material and no, it wasn’t him. It was a guy named Mike Saunders. When I asked Mike years later where he got the term from, he said from Lester. But of course Lester and he and the batch of guys from Creem Magazine were all living together so Lester may have mentioned it in terms of discussion, but Mike was the first to use it in print. You pays your money, you take your chances.

But there were things like Montrose’s first album with Sammy Hagar singing that had lots of the elements, but if you look at Judas Priest’s Sad Wings it has not only all the sounds but also all the various themes and also the visual iconography.

JB- Why is Lemmy God?

DW-Number one because he came into music at a time when artists could do anything, before all genres became specialized. I mean when he was with Hawkwind, there was jazz going on there as well as hard rock and psychedelia going on in the same band. From about ‘68-‘73 in Britain and the United States, the audience for rock music wasn’t broken into tribes. And then in about ‘74 or so it started breaking down into tribes. He already did want he wanted to do he was sort of spoiled by the times and then when he was thrown out of Hawkwind, he just and he did what he wanted with his music, which in some real sense is not metal at all as he always claimed. It was really hard rock ‘n’ roll. Think of how unique AC/DC is-- who he admires greatly and always did.

He was there before metal became metal and he did things his way and the other thing he happens to be really well-read. I will put him up against any history professor on World War II and he’s pretty good on World War I also. He taught himself German and I’ve had discussions with him on Nietzsche. In some zine one time I wrote a piece on Nietzsche’s Favorite Metal Songs and Orgasmatron was number one. Lemmy’s smart and willful and there’s a lot going on there.

JB-Who are some of your other favorite metal personalities?

You know that’s the problem. One of the things I’ve found horrible about meeting people is that the quality of the music and the quality of the person are almost arbitrarily related. Some of the grandest music is made by biggest schmucks in the universe, and some of the sweetest people make some of the worst music. For years I just had to really get over that.

JB-You really have to separate the person and the music. They can be totally opposite.

The Ramones and Motorhead went on tour together. When you look at Ramones and Motorhead, they had elements of metal but neither one was really punk or metal.
(Joey and Johnny) I wouldn’t wanna know either of them and DeeDee (was) even worse, but the music was magnificent. So that’s an example. Who else do you like?

The first album did nothing for me. But I love Slash’s guitar playing. I’m a guitar wonk. I could talk guitars endlessly. I must admit that I thought Axl was one of the world’s greatest frontman.

JB- Of course, Axl was a big question mark as a person.

DW-There is no doubt. Nobody in that band was a functional human being. The very, very drunken Slash was probably the most together guy in the band.

JB-One of my rock critic friends once said, “If I only listened to music by people I like or people who are nice, I’d never listen to anything!”

DW-He’s got a point there.

* DW's Comments About Some Other Metal Bands*

I met the guitarist for Slipknot. They came out of death metal bands. They’re great musicians, but they’re also huge fans of music. There’s a wonderful death metal band that I love dearly called Macabre. They only do songs on serial killers. They had a whole album on Jefferey Dahmer. They’re genius musicians, and they’re hysterical. Corporate Death, the singer-guitarist, is verbally magnificent. The guy from Slipknot drove in an ice storm from Des Moines to Chicago just to catch their show.

Kill ‘Em All was their best album and it went downhill from there. 80s Metallica vs 90s Metallica. I saw the Garage Days Revisited tour. Lars, after 4 songs, he can finally drum. The vocals in the '90s annoy me. Cliff kept Metallica’s vision in the same way Johnny kept the Ramones’ vision. He died, they changed.

JB- Even after all these years, heavy metal music gets a bad rap in the mainstream media.

I think its good, actually. It gives them an unwimpy rep. They kinda like that. So let the mainstream think whatever they want.

A book just came out called Bad Music. I did a chapter on why the critics need heavy metal. They sort of needed it til the last four or five years as their whipping boy for "what is bad music."

JB-I recently interviewed an English writer and was amazed at how seriously they take rock music there.

DW-In England (metal fans) radically live and breath subcultures that can’t exist in the U.S. for a series of reasons. You can’t be into it because we don’t have the same class system they have or the same lack of geographic mobility. When they get married so many of the metal guys hide their music because they’re supposed to be friends with their wives. I can’t understand the idea of marrying someone who does not like the same music you do. I just cannot understand that, but so many of them do it.
Posted by JadeB at 1:43 PM No comments: