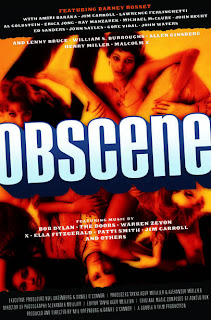 "I feel personally that a word has never been written or uttered that should not be published," was Barney Rosset’s mantra as publisher of Grove Press and the literary journal Evergreen Review. Rosset stayed true to his conviction til he sold the company in 1985, despite several infamous court cases and constant badgering by the U.S. government. Grove Press and its imprints introduced writers as diverse as Samuel Beckett, Henry Miller, Amiri Baraka, Jean Genet, Allen Ginsberg and Malcolm X to the American public. The documentary, Obscene—How Barney Rosset Published Dirty Books for Fun and Profit traces Rosset’s journey from only child of a conservative Illinois banker to king of literate smut and crusader for free expression during the pivotal 1960s.

Rosset turns out to be as much of a larger than life character as the writers he championed. As the driving force behind Grove Press, Rosset presided over some of the most tumultuous literary episodes in American history. An overachiever at an experimental high school in Chicago, Rosset joined the Communist party for a time and rated John Dillinger as one of his (anti) heroes. He chummed around with fellow student and future cinematographer Haskell Wexler and dabbled in writing and film. Eventually, he was able to pursue his love of film and photography in the military during World War II. After he returned from the service, Rosset married painter Joan Mitchell and bought a floundering book publisher.

That company, Grove Press, became America’s foremost“avant guard” publisher from the 1950s to the early 1970s. Rosset brought one controversial book after another to the States, going to court to defend Lady Chatterley’s Lover, Henry Miller’s Tropic of Cancer and William Burroughs’ Naked Lunch. Lawyers cost a lot of money, and Rosset had to fill the coffers again somehow, so he added other projects to the Grove empire. The publisher produced and distributed films for awhile, and developed the infamous Black Cat series of Victorian and spanking erotica. (Man With a Maid, anyone?) One of Rosset’s biggest moneymakers, turned out to be the Swedish soft core porn film I Am Curious (Yellow).

After funneling most of Grove’s money into court cases (and winning), the problems didn’t stop for Rosset and Grove, but instead regressed to the next level. Grove Press never recovered from the 1-2-3 punch of protests by disgruntled feminists, an attempt to unionize Grove employees, and a bombing of the publishing offices (rumored by some to be perpetrated by the CIA). Curiously, the explosion occurred around the same time Rosset published works by Che Guevara.

The documentary is sprinkled with snippets of an interview Screw publisher Al Goldstein conducted with Rosset on his cable show Midnight Blue. Once NYC counterculture icons, they come across now as endearing old smut peddlers, kibitzing about failed marriages and bad business deals. Al introduces Barney, in part, as a “shitty businessman.”

Filmmakers Neil Ortenberg and Daniel O’ Connor interviewed a treasure trove of Grove authors and other writers for Obscene, including John Rechy, Jim Carrol, Erica Jong, Betty Dodson, Lawrence Ferlinghetti, Gore Vidal and Michael McClure. And, of course, no documentary about shocking and allegedly obscene art would be complete without comments from Ray Manzarek and John Waters, and they’re included here. Ortenberg and O’Connor have fashioned a poignant and heartfelt documentary about Rosset, his Grove Press co-conspirators and the authors they published. While Obscene is sympathetic to Rosset and his plight, it’s not candy-coated and cites such problems as Rosset’s bad business acumen, occasional naivete and stern office rules.