Book Review: Shout It Out Loud: The Story of Kiss’s Destroyer and the Making of an American Icon by James Campion 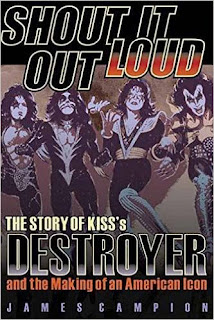 Shout It Out Loud: The Story of Kiss’s Destroyer and the Making of an American Icon

Released on March 15, 1976, Destroyer catapulted Kiss from underground sensation to constant media presence. The recording of Destroyer was as colorful and chaotic as the album itself, and every nuance is covered in James Campion’s book Shout It Out Loud: The Story of Kiss’s Destroyer and the Making of an American Icon.

Before Destroyer, Kiss attracted mostly male fans with songs about sex, sex, whores and more sex. (OK, so not that different from what they’d do later on.) With the single “Beth”, the band catapulted into mainstream consciousness and have remained there for over 40 years.  When Kiss Alive was released in 1975, it became an unexpected hit, and the recording of the next studio album took on new importance.

The book covers the band or “The Act’s” (Campion’s term) pre-history and their first three albums for legendary Casablanca Records. Despite their outrageous appearance and a music press that lapped it up, mainstream success eluded them.  You’d think with all the facepaint, leather and platform boots they’d storm through mid-70s America immediately, but the road wasn’t that easy.

Bob Ezrin, the young Canadian producer who helmed Alice Cooper’s Welcome to My Nightmare, signed on to produce the band’s fourth studio album. Ezrin greeted the band naked except for a bowtie (allegedly), but the recording sessions that followed weren’t always quite as light-hearted. Ezrin schooled the band in music theory and challenged them to expand their creative horizons. A stern taskmaster, he even refused to procure Gene’s hookers for him.

Ezrin ran the sessions like a musical boot camp, taking the demos and working with the band to improve them. Case in point - “Beth” started out as a demo from Criss’ old band, Lips. Originally a song called “Beck” about a nagging wife, Ezrin and the band reworked it into the ballad that saturated the airwaves in 1976.

The song, originally paired as the B side of “Detroit Rock City”, took off when DJ Rosalie Trombly of Windsor-based, Detroit-aimed CKLW started playing it, preferring it to “Detroit Rock City”. Listeners loved it so much Casablanca made it the “A” side, and the ballad became “The Act’s” best-selling single ever, reaching #7 on the Billboard charts.

The Destroyer sessions succeeded in turning the four distinct personas – previously relayed by just costumes and make-up, and breathed fire (excuse the expression) and life into them. The album - and “Beth” were the starting point of the “How Can We Miss Them If They Won’t Go Away?” Kiss empire. The songs weren’t just rowdy party anthems. Under Ezrin’s direction, they took on mythic proportions.

“Do You Love Me?” established Paul as the Starchild, the group’s romantic lead. Ezrin and the band reworked the Stanley-penned “God of Thunder”, into Gene’s theme song, giving his onstage demon persona the perfect soundtrack. “Flaming Youth” and “Great Expectations” were positioned as youth anthems.

Drawing from Stanley’s memory of a news story about a fan who died in a car crash somewhere in the South, Ezrin sandwiched “Detroit Rock City”, a raucous tribute to the Motor City, with an audio melodrama, complete with news radio snippet and car crash sound effects.

Campion devotes quite a bit of detective work attempting to unearth the real story behind the tragedy that spawned “Detroit Rock City”, and the entire epilogue is devoted to this subject. The book consists of new interviews and tales from Ezrin, Jay Messina, Corky Stasik, Kim Fowley, Bob Gruen, Ken Kelly, (the artist who designed the iconic comic superhero cover),and lots of archival interviews.

Shout It Out Loud: The Story of Kiss’s Destroyer and the Making of an American Icon may be way too involved for the casual fan. If you’re looking for some quick gossip, or if the nuts and bolts of songwriting and the analog recording process bores you, this book’s not for you. There are the usual tales of Ace and Peter’s drinking and drugging, sex in the studio and such, but Shout It Out Loud concentrates on the writing and recording and subsequent promotion of Destroyer in minute detail.

Devoted Kissaholics, however, will appreciate the look into every nook and cranny of the recording sessions, promotion and tour that accompanied Destroyer.