Movie Review: Groupie Girl (aka I Am a Groupie) - British Psych-Pop Cinema, 1970 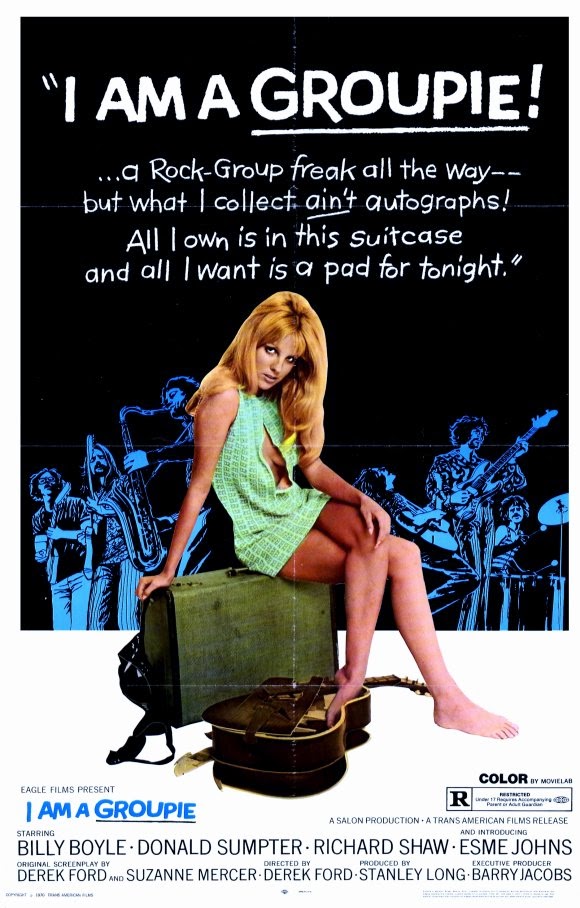 Not every girl who fancied musicians during the 1960s and early 1970s had the charisma or marketing chutzpah of Pamela Des Barres or Cynthia Plaster Caster. Girls competed for the attention of rock musicians the way girls vie for the attention – and pocketbooks - of entrepreneurs today. Most of the' 60s /'70s groupies, didn’t get a payoff or career boost, unlike today’s girls. No, they were just in it for the adventure. And some of those adventures weren’t much fun.

I Am A Groupie (aka Groupie Girl) is a depressing recreation of the late '60s/ early '70s groupie scene. The screenplay was co-written by Derek Ford and Suzanne Mercer. Mercer was a former groupie for the 2nd tier British glam band Juicy Lucy, so that may be one of the reasons this movie is so realistic. It plays out like a dreary, low-rent version of Almost Famous.

Bored small town girl Sally (Esme Johns) attends a rock show and stays in the local dancehall after her friends have caught the last bus home. She likes the looks of the band’s lead singer, and stows away into their van while they load up after the gig. Sally hides in the back until halfway through the trip and suddenly introduces herself to the band. They aren’t too happy to see her, but make the most of it. When the band gets to their destination, it’s not exactly the Riot House on Sunset. In a bleak overhead shot, we see Sally walking around naked in the middle of four twin mattresses, each with one of the band members. But there’s no morning shag for her; she’s ordered to get the band coffee and cornflakes.

There's not much of an emphasis on music in Groupie Girl. The original music is instantly forgettable. All the songs sound like watered-down Badfinger or the B-side from a 1970ish one-hit wonder band.
Sally wanders lackadaisically through the movie - or maybe the character is just supposed to be permanently stoned. Sally does ingest an entire hash cake near the end of the film, She passes out and avoids getting hauled off to jail with the band and another groupie. She wakes up and wanders into a room where a nice folk musician plays guitar. He  warns her that she’s just being used and will be tossed aside. At the film’s end, we find out he’s just as big of a jerk as the other blokes. 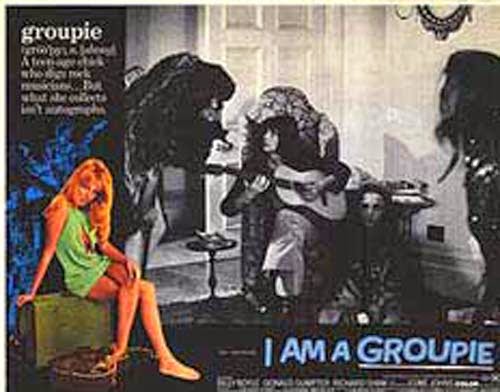 The only other female characters in the film are groupies, and catfights resulting in nudity ensue. There’s a sex party scene orchestrated by an older guy, who convinces the hippie kids it will be fun. One of the band members slyly avoids a pushy older woman, who’s obviously after him, during the free-for-all. In another scene, Sally is demoted to #3 groupie as one of the band members dallies with twins.

In a final humiliation, she is, quite literally, passed from one band to another in one scene with tragic consequences. This leads to a cover-up by the band’s sleazy manager – and Sally is sent packing by film’s end.

Groupie Girl is a somber and interesting period piece – much more watchable than you might expect, given the subject matter. It’s Brit-psych exploitation with a serious thread running through it. It reminds me of Up the Junction and other films about working-class England in the '60s and '70s more than soft core exploitation. Groupie Girl bears no resemblance to the free-spirited “the music is all that matters”/"I'm a muse" credo of Almost Famous. The groupie scene in this film is the flipside to all that feel-good, Band-Aid glamour. You can watch the movie for free on YouTube. (see below)