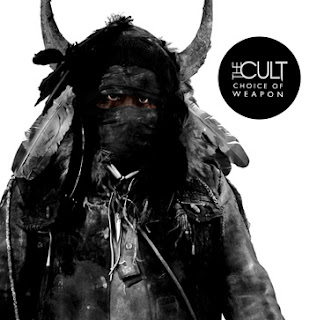 With their ninth album, Choice of Weapon, The Cult are back with a vengeance. After the lackluster reception to 2007’s Born Into This. With the aid of co-producers Chris Goss and Bob Rock, the band returns to their urgent, fiery best. After all, Rock did produce Sonic Temple. 1994’s The Cult and the criminally under rated Beyond Good and Evil.

Singer Ian Astbury is back at his shamanistic best.  His vocals, now deeper and more controlled, have urgency to them. His lyrics, derived from Native American mythology, Buddhist teachings and plain old life experience have taken on a maturity that alternately soothes and provokes. Billy Duffy’s rousing guitar work is at its blistering, seductive best on tracks like Lucifer and The Wolf.

The adrenaline-pumping rhythm of “Honey from a Knife” starts off the album, abetted by James Edwards’ chugging piano and the background vocal chant “We got the drugs”. Ian channels Jim Morrison in Pale Horse (which reminds me a bit of “King Contrary Man from Electric), and the hopeful poetry of “Elemental Light.” For the Animals, the first single, barrels through your speakers (or iPod) like a force of nature. The driving immediacy of “Amnesia” recalls the Stooges’ Raw Power. 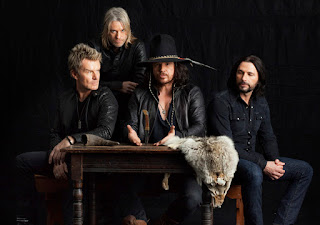 The hallmark of the band has always been the unique chemistry between vocalist Astbury and guitarist Billy Duffy. Duffy’s earthy riffs meet Astbury’s pontificating shaman head-on, and the combination has produced some iconic sounds since 1983. And this is one band that’s never fit into a neat little genre. They wore make-up and  sported poufy hair during the Love-era and before, but they were new wave? Nope, not with that guitar sound.  With the Rick Rubin-produced Electric, they were heavy, but not heavy metal –the lyrics were too hippie-ish. Even Sonic Temple, released during the waning days of the hair band era, was too smart to be lumped in with other hard rock albums touted by MTV circa 1990. Fans who’ve stuck with the band for better or worse will find Choice of Weapon as aggressive as Electric and as lyrically thought-provoking as The Cult.

Even younger metal (and punk) fans will appreciate Choice of Weapon’s take-no-prisoners approach.  Against Me and Icarus Line are opening their L.A. show, and the snarling, passionate riffs of Choice of Weapon are just as aggressive as those younger fans are used to. This album has a ramped-up, renovated sound. It’s not hard rock nostalgia for fans who prefer their music in an unaltered state, regardless of the year.

The Cult’s line-up has remained steady since 2007, with John Tempesta on drums, Chris Wyse on bass and touring rhythm guitarist Mike Dimkich. The band’s U.S. tour runs now through June 23rd, with the final “Hometown” show at the Hollywood Palladium. A European tour follows in July and August.