Danseparc-Martha and the Muffins CD Review 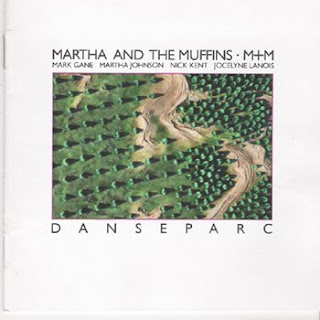 Danesparc by Martha & the Muffins—or M & M, as they preferred to be called now is one of those quietly heralded new wave albums that misses most top of the decade lists, but remains a favorite with diehard music buffs. Martha and the Muffins gained fame with their frothy dance hit “Echo Beach”, but M & M’s founders, Mark Gane and Martha Johnson, had much more to offer as evidenced by the rich tapestry of horns, sound effects, layered vocals and percussion on Danescparc.

First released on vinyl in 1983, Danesparc remained out of print for years, but is now available in a digitally remastered 25th anniversary CD edition on Cherry Red Records, complete with lyric booklet and bonus live tracks

Martha and the Muffins first album, Metro Music, spawned “Echo Beach” and a world tour for this Toronto based band. Shortly after that trek ended, keyboardist Martha Ladley, bassist Carl Finkle and drummer Tim Gane left the group. New drummer Nick Kent and bassist Jocelyne Lanois revamped the Muffins with a more cerebral, cutting-edge playing. Jocelyne suggested her brother Daniel produce their 1981 album This Is The Ice Age and the rest is history. Daniel went on to produce such artist as Bob Dylan and Eno, but cut his teeth, admirably, on several Martha and the Muffins projects.

While the songwriting team of Johnson and Gane had expanded their experimental sound on This Is the Ice Age, Danesparc was their biggest critical success. It proved that Johnson and Gane were Canada’s version of New York post-punk hipsters-- minus the pretentiousness. M &M are more listener-friendly than David Byrne and more intellectual than Human Leauge.. In “Obedience” they pick at the intricacies and foibles of everyday life. This is Johnson’s baby as she she uses her voice as an instrument, using the word “repeat as a mantra against escalating tribal drums. It’s small but specific touches like this that give Danseparc its flavor.


The cover of Danesparc is a photo of a miniature park setting, all tiny trees and grass. While it looks like an aerial photo of a real park at first glance, it is actually a photo of a miniature park model once owned by Gane and Johnson. owned by Gane and Johnson. The park as a social setting provides subject matter and imagery for much of Danesparc. “Boys in the Bushes” was inspired (not surprisingly) by a trip to San Francisco and the extracurricular activities of its gay male residents.The dizzying tone of “Several Styles of Blonde Girls Dancing” marks its territory with jaunty percussion and Gane’s deadpan vocals, which disintegrate into growls at certain points in the song. Here, the wordplay (and the park theme) continues with lyrics like “a verdant park of small proportions underneath the sky/ the turtles eggs/the dancing suns/the things I can’t explain.” Each song on Danesparc unravels like a stream of consciousness dialouge describing everyday emotions set to a background of horns, hand claps and/or percussion.


The bonus tracks include a live performance of “Sins of the Children” and the dark dance synth of “These Dangerous Machines”, an eerie bit of rock disco that is best played with the lights off. For those who like discovering (or rediscovering) brilliant but often under publicized recordings of ‘80s post-punk and “new wave”, the remastered edition of Danesparc is one of the “lost” gems of that era.