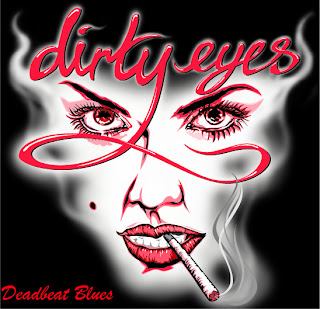 Dirty Eyes are among the handful of punk, glam-rock and garage rock bands bringing adrenaline-pumping sounds back to L.A. music clubs. Dirty Eyes have covered a lot of ground since forming in L.A. in 2006.  They’ve played shows with dozens of national acts and local movers and shakers including the Joneses, Zeroes, Nikki Corvette, Billy Bones and the Crazy Squeeze. They've played a live set at KXLU and  joined last month’s tribute to Johnny Thunders at the Redwood Bar. Their music is a combination of the Dead Boys, the Ramones and Chuck Berry with a bit of  blues-rock thrown in for good measure.  It’s rock and roll with no frills, tricks or whining. The band consists of Donny Rox on vocals and guitars, Anthony Stasi on lead guitar, John on vocals and drums and Jareth on bass and vocals.

The band’s first full-length CD, Deadbeat Blues, is now available for download from iTunes, TuneCore and Amazon. And, of course, you can still purchase the old-fashioned physical CD from the band at one of their gigs. Patrick "Frenchie" French of the Joneses plays harmonica on the album and the rollicking piano is courtesy of Alex Galvan. Deadbeat Blues was produced by Arthur Alexander of  powerpop band Sorrows, who will play gigs in LA, New York and Europe later this year.

The CD’s title song, Deadbeat Blues chugs along with the rhythm section leading the way – there’s some great drumming on this one. The tune is like an indefatigable locomotive ride complete with tasty guitar solo. Takin’ A Dive is short and to the point rock, with snarly, attitude-laden vocals. Honky-tonk piano punctuates the similarly pithy Self-Destructive Man.  Ain’t Nothin' To Do channels the Dead Boys, while Yellow Fever combines  blues, Jerry Lee Lewis and ‘70s era Aerosmith hard rock. Skin of Yer Teeth combines all the band’s influences in one rapid-fire package that would satisfy any audience that likes sleazy, hard-edged rock ‘n’ roll.

Deadbeat Blues combines hardcore punk and hard rock, but the vocals are punk all the way. Dirty Eyes’ music will appeal to punk rockers more so than metal fans; it’s just got that speedy, snarly vibe, but anybody who appreciates essential rock n roll will get it.