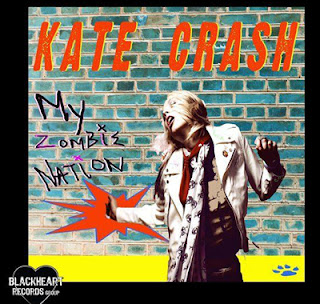 Kate Crash’s colorful persona is well-known to underground Hollywood scenesters. She was pegged as one of the ten most eccentric characters in L.A.’s nightlife scene by the Weekly’s Nightranger column this February.  Honing her creative vibe as a street performer in Tokyo, Crash transferred her flashy modus operandi to L.A. a few years ago. A singer/performance artist/poet and fashion designer (she has her own DIY clothing line, Crashion), Crash has played gigs at the Three of Clubs, Cheetahs and opened for Joan Jett and the Blackhearts at Taste of Newport in Newport Beach.

Crash’s latest EP, My Zombie Nation, is her first release on Joan Jett’s Blackheart label. The EP is spunky rock with just a hint of poetry. Ain’t Got Much features Kate relating some real-life tales Patti Smith style, underscored by dirty, straight-ahead guitar-slinging. The playful old-style synth motifs of Yumi and the Sound amplify the song’s playful, shout-along ambiance.

Produced by Nick Launay (Nick Cave and the Bad Seeds, Arcade Fire), this four-song EP translates Crash’s bubbly onstage personality onto her recordings ; the tunes are all good fun, championing a blend of glitter rock and street beats. Bonus: If you get a chance, check out the video for Generation of the Bored on the Blackheart website. It’s a kinetic splash of neon poking fun at reality stars like Paris Hilton and their influence on today’s tween girls.