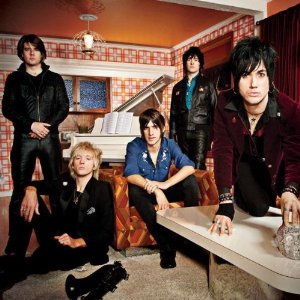 Prima Donna, a five-piece band from L.A, has rattled venues in Southern California and beyond since 2004. They've already put down their brash hybrid of punk and glitter rock with a who’s who of famous and infamous punk bands. The group opened for Green Day on the band’s 2009-2010 European tour, and the band’s singer/guitarist, Kevin Preston, performs with the Foxboro Hot Tubs, a Green Day side project. Prior to that, their onstage cohorts in rock ‘n’ roll crime included Texas Terri, Glen Matlock & the Philistines, Eddie and the Hot Rods, and plenty of local SoCal punk bands.

Their first album on Acetate Records, After Hours, introduced their modern take on glitter rock to a wider audience. The band’s second release on the label, Bless This Mess, revs things up a few notches with the help of engineer Chris Dugan’s (Green Day, Iggy Pop) faultless production.

The 12 songs on Bless This Mess have a cleaner, and more mainstream appeal than Prima Donna’s previous efforts, but the songwriting and rock bravado are as sharp as ever. The catchy album opener “Sociopath,” the confident, strutting bop of “Maxine,” and the "Jeepster" era T. Rex undercurrent of the single “Feral Children” are enough to reel in even the most jaded listener. But there are nine more impressive tunes on the CD, and Prima Donna delivers the kind of unapologetic rock energy on it that is missing from most up-and-coming bands touted by the mainstream rock press.

Preston has old-school rock charisma and is quite the frontman in concert. Guitarist Erik Arcane, bass player “Lights Out” Levine and drummer David S. Field provide a non-stop, rock ‘n’ roll party sound derived from influential rockers of the past like the Ramones and Mott the Hoople. Aaron Minton’s sax playing gives the band that something extra, that bit of musical swagger and spice that sets them apart from the handful of young glam punk bands on the scene today. It’s like combining Johnny Thunders’ descendents on guitar (Preston, Arcane) with X-Ray Spex. The foot-stomping “Miss Avenue,” with its sax intro and rollicking piano interlude, defy listeners to stand still.

“Broken” is the album’s most distinctive cut. It wraps ‘60s Brit Invasion pop with the band’s glam influences. It really demonstrates how their sound has evolved.

It looks like 2012 will be a busy year for Prima Donna. They’ve already received a write-up in the Huffington Post for their performance at London’s KerPUNK Festival. They were filmed for a Corona Beer commercial, and their European tour is in full swing in February and March, with a U.S. tour to follow.

Bless this Mess is scheduled for release on Valentine’s Day. If you’re a fan of straight-on, raunchy rock ‘n’ roll, and are tired of scouring iTunes and your old vinyl collection for retro faves, you’ll appreciate Prima Donna’s music. And if you’re a young fan who wants to sample your generation’s version of hipster-free, high-energy rock ‘n’ roll, look no further than Bless This Mess.