Book Review: The Pyrotechnic Insanitarium: American Culture On The Brink by Mark Dery 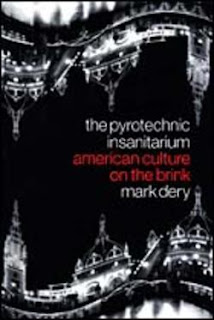 (The Pyrotechnic Insanitarium was published in December 1999, before 9/11, the economic meltdown, reality TV, etc. I would love to see an updated version of this book. This review was originally published on January 27, 2001.)

In his book, The Pyrotechnic Insanitarium: American Culture On The Brink (Grove Press), social critic Mark Dery, a contributor to The Village Voice, as well as numerous e-zines, deconstructs and filters the excesses of post millennial America. He explores the once seamy underbelly of media and culture that has now become mainstream. One perusal of this book, and I can hear my dearly departed grandpa say "I told ya!! World's going to hell in a handbasket!"

Dery examines the whos, whats and most importantly, the whys of America's current freak show climate. The best chapter is "The Cotton Candy Autopsy" which focuses on evil clowns, deciphering all the scary critters from Ronald Mcdonald to John Wayne Gacy, but with no mention of the "Evil Clown" CD store in Chicago, a personal favorite. Taking this way of thinking a bit further, another chapter focuses on freaks of nature as the norm, most noticeably the cornucopia of breast implants and plastic surgery as common as Clairol, and the transference of body image into something unnatural.(The porno industry would have you think there's nothing strange about a 110 pound woman with 40 FFF breasts.) The cluttering of nature by the surgeon's scalpel is further explored in a chapter about cloning and childbirth without women. Who needs to have a baby the old fashioned way. "1984" and "Brave New World" are here in starkest detail - for good or naught hasn't been determined yet. The Unabomber took umbrage at such scientific progress, though, and destroyed many innocent lives, thanks to his lack of participation in sports as a child, inability to get a girlfriend, and hatred of technology (Chapter 13).

Living freaks aren't the only ones gaining popularity-witness "Formaldehyde and the New Grotesque"(Chapter 7) introduced to the layman by the Nine Inch Nails "Closer" video. Joel - Peter Witkin and his contemporaries, most noticeably the Mutter Medical Museum and their collection of medical oddities, are part of a whole subgenre of artists re-creating and photographing malformed child skulls and conjoined twins. It's a different, artier way to capitalize on side of human nature that gawks at car wrecks.

Personally, the subdued grotesqurie ensconced in a tiny chapter about Home Shopping's Gallery of Dolls brings all this weirdness to a shuddering reality for me. I worked for a doll collector magazine a few years ago and talk about a freaky world. Like the clowns, there's a nasty underside to those sweet-faced little Angelique dollies and the blue - haired old ladies with life sized recreations of real children in their homes.
(It's no surprise Anne Rice is a big doll collector.) Hey, did you hear the one about the 60-year old doll designer hawking her creations on HSN's Gallery of Dolls with her 30-year old boy toy beside her wearing Peter Pan tights. THIS ACTUALLY HAPPENED.

But fear not, there's a lot of sprucing up on the horizon.  In our Disneyfied suburban homes (see Chapter 8, re the clean-up and packaging of everything from Times Square to suburban neighborhoods by Disney and their peers), we can indulge in all this voyeurism of the hideous & riveting in our den on Mickey Mouse Lane while our teen-age kids tattoo their ankles with the Nike corporate swoosh. Fringe elements are now mainstream, bloodsports and piercings and Satanism are featured on the Five O' Clock News. This is now a fringeless society. What's left in the underground if serial killers and psycho clowns are joke fodder for DJs in Dubuque? If there's anything that Dery's essays, read one right after the other, indicate, it's that the world in general has turned into a one big freak show, with "normalcy" being the exception. Is it really a brave new world, or merely an empty, soulless one?