Interview: Larry Harris, Author of "And Party Every Day: The Inside Story of Casablanca Records " 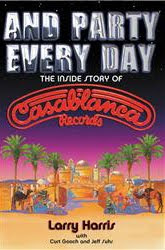 Casablanca Records was synonymous with the excesses of the music business in the 1970s. Rumors about the label’s heyday and it’s exuberant president, the late Neil Bogart, have abounded for years, but no official history existed until the 2009 publication of And Party Every Day: The Inside Story of Casablanca Records.

Penned by Casablanca co-founder Larry Harris (with Curt Gooch and Jeff Suhs), the book traces the controversial company’s rise and fall in no holds barred detail. All the major players are here, from Casablanca’s exuberant president Neil Bogart to Kiss, Donna Summer, the Village People, and all the behind the scenes managers and promotion people that made Casablanca the most infamous record company in music biz history.

I recently interviewed Harris via phone and here are some of his reflections about those halcyon days of sex, drugs, disco, and rock ‘n’ roll.

On Seeing Kiss for the First Time

It was shocking. It was like “Oh my God! What’s going on here? Where did these guys come from”? You get a feeling that it’s really cool but to know that its going to be really big. When You know how hard it is out there for artists. We did know that we had something we could use as a hook, which worked in their favor and against them, was the makeup. The show that we saw was in a tiny studio and there were no special effects of any kind. So it wasn’t what it wound up being.

Well, they brought it to the next level. A lot of critics hated them.A few critics thought it was okay. Lester Bangs, one of the most famous rock critics ever, was in their court, as were the people at Creem and Circus. In those days, even Rolling Stone thought they were terrible.

Once the word got it was impossible. We had to spend so much money and go into hoc They had to go out on the road and perform that was their strong point.Their music wasn’t the best. There were better musicians, but when it came to a stage show there was nothing really better out there.

We had a picture of her from Germany that was very heavily airbrushed. That’s all we had, one little picture of her, a headshot. "Love to Love You, Baby" that was the only song we had to listen to. Neil and Joyce, Neil’s wife, wound up managing Donna and developed her persona. I known that Donna said she was uncomfortable with being pushed as a sex symbol. She has since obviously changed but she does have an incredible voice. And she’s written some hit songs that are wonderful. “She Works Hard for the Money” is a great song.

To be totally frank with you, they were one of the easiest bands that I ever promoted. One of the easiest bands that I ever promoted. “YMCA” came out, boom!. “Macho Man” came out, boom! We hardly had to ask anybody to play it. It was like almost overnight they just jumped on the record. For a long time nobody noticed that the guy who did it add was gay and wanted to expose more of that lifestyle to the world and have some fun with it,-which he accomplished. And the music was infectious. How many people you know who don’t jump up and down at “YMCA?”

George was a definite “character” (in quotes). He was one of those people you meet and you never forget. He brought funk to the world and all the hip-hop musician’s were sampling him and still do. In those days they (Parliament) sold as many records as Kiss or Donna or The Village People. They sold a lot of records. And they held stadium shows. They’d play in front of 40,000 or 50,000 people.

Their show was not wonderful. It was not something a lot of rock fans could rock out to. After awhile, I think Greg Giuffria’s influence in using so many keyboards was too much. How many Emerson, Lake and Palmers do you need? I think the keyboard sound was probably too much for everybody. They didn’t write any great hit singles that would propel them to the next level in those days.

The rumor is that Spinal Tap used Angel screwing up on their pods as some kind of background for that. Whether that’s true or not we’ll have to ask whoever wrote the screenplay.

It helped that we were so big in the disco genre that people would come into record stores and ask for Casablanca, not even (the individual) artists, but just what was new. We consciously took had Casablanca’s name on it. Today if you look at record ads, you don’t even known what label they’re on. They don’t say Sony, they don’t say EMI — they just don’t, and I don’t know why. I don’t understand it.

I think that’s what some of the problem has been with the music business. They’re not going out there and helping careers anymore. They certainly missed the boat on the Internet. They should have embraced it. It’s easy to look back. In hindsight, they lost the battle.

There were still a lot of guys who brought themselves up on the streets running record companies, guys who started out as musicians or disc jockeys like Joe Smith from Warner Brothers. These people were entrepreneurs who really believed in the music. They tried to work as best they could with the artists. Some artists were easier to work with than others and there was more experimentation going on. Yeah, they wanted to make money but I don’t think anybody was going into it to be a superstar like they are today. I think they were going into it because of love of the music. Or just “I wanna have fun while I’m young”, and it was the whole period. Vietnam had ended in the mid-'70s, the women’s liberation movement, The Pill, Martin Luther King, civil rights — there were all these other things going on in the culture. It never happened before in America and that added to it all. It was like, “Well, the old people did a bad job. We’re not going to listen to anything they tell us — and now we find ourselves as the old people!

We all did coke. We all smoked grass. We all did Quaaludes, to be honest, and I know about the company’s reputation. We didn’t do any more than any other company did. We didn’t hide it. For some reason, we weren’t really afraid of getting arrested. Lawyers and bankers for huge banks were doing them — really strait-laced looking bankers from huge banks were doing them with us. I talk about it in the book; during my first few days in L.A. the first person I smoked a joint with was David Janssen, “The Fugitive,” and that was a trip! Who would ever think — the Fugitive! It was part of the culture at the time especially in the music business. As for shady deals, there was payola going on all that stuff and again we weren’t the only ones doing it. Everyone in the business was doing it.

Albums sales are down. Concert sales are down. Things are changing. There’s too much for people to do. You have video games, the Internet, there are eight million things you can do with the iPhone and 200-300 TV stations. There used to be five. There are too many choices. It’s harder to get a niche into something. You got to really stand out like a Lady Gaga.