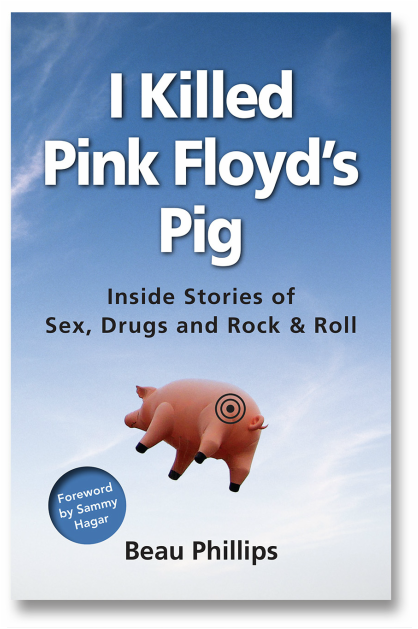 
Beau Phillips, a former DJ at KISW-FM in Seattle and a senior VP of marketing for MTV Networks, chronicles some of his encounters with  rock royalty from late 1970s to the mid-1990s  in I Killed Pink Floyd’s Pig: Inside Stories of Sex, Drugs and Rock ‘n' Roll.

For all the talk of the decadent ‘70s and ‘80s, these stories seem  pretty tame by today’s jaded internet standards. Instead of rappers shooting each other, we have tales of trashed hotel rooms, pilfered beer, Van Halen and strippers taking over a radio station control room and British rock stars trying to understand softball.

The short, breezy chapters feature a “Who’s Who” of 1980s rock, with a few side characters like  a rather lame VH1 contest winner and a fledgling DJ named Jimmy Kimmel. (I wonder what happened to  him?) Groupies figure in a few of these stories, but the goings-on are described in a comical, PG-rated way.

Readers of a certain age will remember the radio station promotions that tied in with a band’s concert appearance.  The promotions, usually involving a crazy scheme, would last for weeks or sometimes months in every city the band played.  Some contests were random ticket giveaways, but others got pretty inventive. Professional skullduggery between radio stations in the same market (regardless of demographics) could get cutthroat. Such shenanigans would get you sued today!

Before Clear Channel took over 99.9% of terrestrial radio stations,  many small, local companies with little to no broadcasting background owned radio stations.Like Mr. Carlson of WKRP, many radio execs were unhip individuals with equally conservative advertisers. This is demonstrated in the story about ZZ Top, a jewelry company and the song Pearl Necklace.

A quick and enjoyable read, I Killed Pink Floyd’s Pig is a memoir of rock’s golden age, when front row tickets were the Holy Grail and the local disc jockeys the gatekeepers.
Posted by JadeB at 11:14 PM No comments: