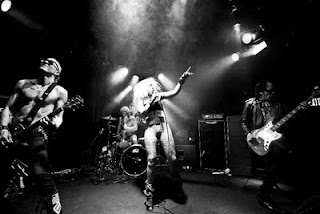 Attitude is important in rock ‘n’ roll; ultimately it’s more important than fashion or technical playing ability. It’s what endears fans to their favorite bands. Barb Wire Dolls, a female-fronted punk band from Greece, have caused quite a buzz in L.A. since moving here in 2010. They've played the Punk Rock Picnic and opened for the Bouncing Souls. They've appeared on the cover of Punk Globe, and Rodney Bingenheimer has played their music on his show. That's not bad for a band that was living in a commune in Greece a year ago. The band’s ballsy performances and in-your-face marketing campaign may be a bit much for people used to mopey indie bands, but true rockers will appreciate it.

Sure, there are lots of punk females in bands now. It’s not an oddity anymore. But you’ve got to have the  energy  and originality to back it up if you wanna be more than a flash-in-the pan.  Lead singer Isis Queen is one half Wendy O. Williams, one half Brody Dalle and all attitude.  She hasn’t brought a chainsaw on stage yet, but I wouldn’t put it past her.. She’s married to the band’s guitarist, Pyn Doll, whose screeching blast of sound propels the songs forward. But it's not all bombast. There's a sense of melody underneath it, and Queen's voice is tuneful underneath the bravado.The Barb Wire Dolls are resurrected street punk meets new-wave style. They’re fun to watch and put on quite a show. You’d have to be really out of it to nod off by the bar while this band is playing.

The Barb Wire Dolls  have a early 1980s punk rock look. They remind me of the time where punk had a little fashion tune up, with girls wearing hot pink zebra-striped tops instead of ripped t-shirts, but still maintained that nasty edge. On songs like So Hot, Black and Blue and California, the band blasts no-nonsense street noise that keeps even jaded L.A. crowds hollering their approval. The Dolls played a residency at the Viper Room to enthusiastic audiences in July, bringing a bit of attitude back to the Sunset Strip. Their forthcoming 14-track CD Fuck the Pussies contains six songs  produced by Bryan Carlstrom (Alice in Chains, Offspring, Social Distortion).

Barb Wire Dolls-Facebook
Posted by JadeB at 8:05 AM No comments: