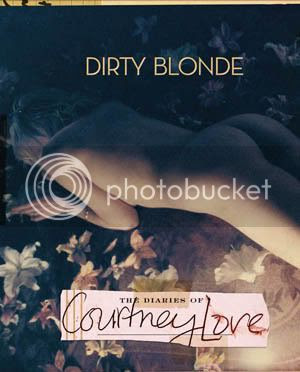 Dirty Blonde:The Diaries of Courtney Love Faber & Faber Hardcover: $35.00 When I first heard a book called Dirty Blonde by Courtney Love was about to be published, I thought “What will she say about the week Kurt died? About Marilyn Manson, Madonna, Trent Reznor, Billy Corgan? I bet she has a lot to say, well as long as she was sober when she wrote it. Hell, if she’s under the influence she’ll have a lot to say too.” But Dirty Blonde is not an autobiography, per se. It is a photo collage, a journal, a hodge-podge of notes, lists, drawings and photographs. It reminds us that grunge was the last underground music movement in America that was not chronicled instantly over the internet. I’d be interested to hear what a person who knows nothing about Ms. Love would say after picking up this book. There’s absolutely nothing linear in it and I wonder what opinion a stranger would have about the scribbled notes, lyrics and goals. "This broads insane!" might be a typical reaction. Lyrics to Celebrity Skin, Softer, Softest, Reasons To Be Beautiful, Sunset Marquis and other songs are interspersed throughout Dirty Blonde, along with such miscellaneous correspondence as a thank-you note from designer Marc Jacobs, a letter that Kurt and Courtney received from David Geffen after Francis Bean was born, and a letter from the Oregon Children’s Services Division concerning young reform school Courtney’s “theft and criminal mischief.” 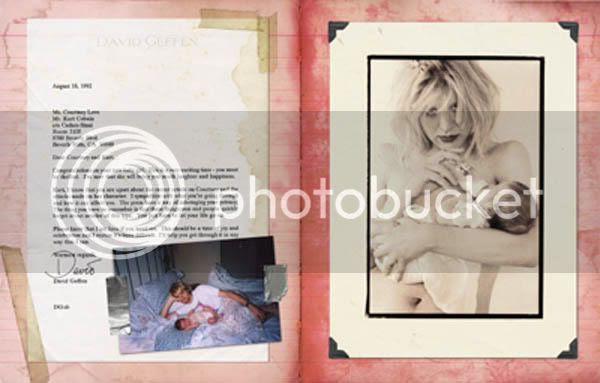 What gets lost and is not addressed much in any of the photos and scribbles in Dirty Blonde is the fact the Love, for all her faults and eccentricities, was one of the only prominent women covered by MTV and the mainstream media to consistently champion lives of young girls and women during the ‘90s. There were, of course, lesser known cult idols who always did so, but Courtney had a broader platform to express her opinions. She addressed certain situations in interviews and on her websites and message boards, such as counseling some groupies for Korn on self-esteem (see www.moonwashedrose ) and was very instrumental in teaching girls to be their own person and not simply adjuncts to men. This is particularly ironic because Courtney is always accused of simply piggybacking on Kurt’s success. But one of Courtney’s paths to fame was associating with other famous or talented people, male or female, even though she had the raw pluck to get to the top herself. She carried on this M.O. even after she become famous, even though it wasn’t really necessary for her to do so with such groupie like awe to stay famous. There’s that contradiction again. The photographs of Courtney in Dirty Blonde are very telling. She’s most interesting before the nose job. The issues of female beauty she touched upon with Pretty on the Inside, kinderwhore dresses, and Live Through This trumped the vacant, cross-eyed stare of her Celebrity Skin days. Courtney’s soulless Barbie doll plastic surgery look and the still seething timbre of her lyrics and music didn’t complement each other. Things got a little too schizoid, and it confused people. So was she a glamorous movie star or a rebellious dirty blonde? Was it even possible to do both simultaneously? I think the blowout after the New York drunk/stoned incidents in the Wendy’s and on the Letterman show fueled Courtney’s current trek to England to follow in the footsteps of her nemesis Madonna. Plus now we have Paris Hilton and panty less Britney, and they are in their 20s. A panty less broad in her 20s in silly and hot; a panty less broad in her 40s is just silly. For all her craziness, Courtney could mention such diverse topics as pop culture, history, Buddhism, yoga, and psychology in her music and interviews from the time she cavorted around the punk rock scene in ‘80s L.A. to the present. We don’t get that with role models for females in music now. Angelina Jolie is the only real female celebrity that can be admired for her dedication to these matters now, and often in a more selfless way than Courtney. The notes and snippets in Dirty Blonde make me wish Courtney would someday write a book in a linear, prose style. (She has said she will never write an autobiography.) But if she did, would the general public take it seriously? When a woman screams “Wax my anus!” and the quote is splayed along magazine pictures leading to said event, people tend to forget all her comments about Buddhism. While there is certainly room in one lifetime to be both a feminist icon and a nasty, out of control harridan, public perception only allows a woman to be branded for eternity as one or the other.
Posted by JadeB at 8:50 PM No comments: