Book Review: The Madame Curie Complex: The Hidden History of Women in Science 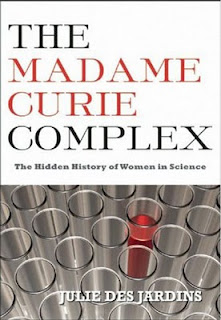 Women populate the business and political scenes worldwide in a way that would do early feminists proud. If you think it was hard for a woman to become a mayor or CEO in the first half of the 20th century, imagine what it was like for female physicist or chemist.

Julie Des Jardins’ book, The Madame Curie Complex: The Hidden History of Women in Science, records the experiences of females who entered and excelled in the cloistered, male-oriented world of science. All school kids know about Madame Curie, but how many people have heard of Nobel prize winning physicist Maria Goeppert-Mayer, who researched the shell model of the atom’s nucleus? Or Annie Jump Cannon, an astronomer who classified stars while working at the Harvard Observatory in the early 1900s, along with other female catalogers known as “Pickering’s women”?

Even though the idea of a woman scientist may conjure a stereotype similar to that of the straitlaced librarian, the women of The Madame Curie Complex are interesting characters who endured initial resistance from male co-workers, juggled family life and long days in the lab without bitterness or complaints. There is a lot of emphasis placed on how childrearing and duty to husband and hearth shared time with scientific work.

One of the busiest ladies chronicled in The Madame Curie Complex, Lillian Gilbreth,  was branded the first lady of modern management. She developed the forerunner to the “flow chart” used by businesses to define company organization and work processes, along with her husband Frank. The couple had 12 children, and their family life was made into the movie Cheaper by the Dozen. Lillian was responsible for designing the first advertising campaign for Modess Sanitary Napkins. Prior to that, the males in charge at were at a loss about how to pitch the product.

In a chapter titled “The Lady Trimates," Des Jardins examines modern primatologists Dian Fossey, Jane Goodall and Germany’s Birute Galdikas. Fossey had a hard life and was murdered (allegedly by poachers) in 1985.  Goodall, a vivacious Englishwoman, became a National Geographic cover girl and media darling.  All were protégés of Louis Leaky, who welcomed them into his circle without hesitation. The studying of primates, and indeed all of zoology, seems a more welcoming branch of science for females. It's that motherly nurturing instinct, Des Jardins supposes.

Meticulously researched and peppered with anecdotes that bring its subjects to life, both as people and scientific heroines, The Madame Curie Complex is a must-read for anyone curious about the role of women in science.