Film Review: Mahler on the Couch 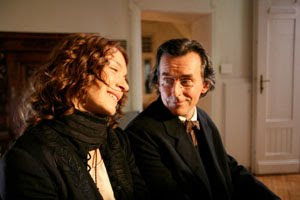 Barbara Romaner and  Johannes Silberschneider star in Mahler on the Couch
The new film by father/son directing team Percy and Felix Adlon, Mahler on the Couch depicts a therapy session between the founder of modern psychotherapy and the famous composer. From the moniker, you’d think Freud’s psychoanalysis of Mahler makes up the heart of the film. Not so. The composer’s visit to see Freud is a framing device that ties together the story of Mahler’s marital difficulties with his vivacious young wife Alma. Still, the actor (Karl Markovics) who plays Siggie lends panache and a sense of humor to his limited screen time. Alma suffers a breakdown and recovers in a sanatorium while having an affair with architect Walter Groupius (Friedrich Mucke). This affair leads Mahler to consult Freud.

Johannes Silberschneider plays Mahler with a multilayered intensity. Gustav is one-third cloistered genius, one-third hardened businessman and one-third hopeless romantic. The obvious star of the film, however, is first time film actress Barbara Romaner. Her performance as a flirtatious muse builds momentum slowly , but captures the viewer’s imagination. We can see why she inspired Mahler and other creative geniuses like artist Gustav Klimt and novelist Franz Werfel.

The Adlons use the “fourth wall” technique throughout the film. Talking directly to the camera, secondary characters, including Alma’s mother Anna Moll (Eva Mattes) and Mahler’s sister Justine Mahler-Rose (Lena Stolze) dispense humorous tidbits about the couple’s situation. This might seem jarring at first, given the film’s dramatic premise, but it works well and gives context to the relationships without being unwieldy. As the film unravels, we see Alma subjugate her musical career to raise their family and help him with his work.The panoramic shots of Mahler’s estate gives us a sense of both emotional and physical scope. The sprawling estate is both Alma’s home and her prison.

Mahler on the Couch is a vibrant character study. It's more about Alma and Gustav than Gustav and Siggie, but the combination does make for a charming and occasionally silly look into the characters in Vienna society around the turn of the 20th century. Like Percy Adlon's Bagdad Cafe, it takes a potentially bleak premise and turns it upright. Ultimately, though, Mahler on the Couch's blend of comedy, romance and feminist parable may be too fragmented for most viewers. The film premiered at the Los Angeles Film Festival on June 24.
Read more: http://blogcritics.org/video/article/movie-review-mahler-on-the-couch/#ixzz0sqpaKtS5
Posted by JadeB at 3:59 PM No comments: