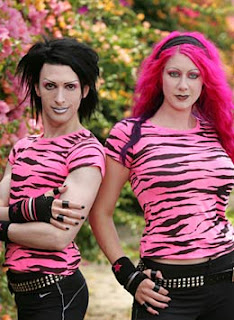 Kynt & Vyxsin from The Amazing Race 12
The first Reality Rocks reality show expo came and went with a whimper at L.A.’s Convention Center on April 9 and 10. I'm not a fan of reality shows, to say the least, but my curiosity got the best of me, and I decided to check out the expo. After all, this form of entertainment has taken over the TV airwaves for the last decade. There must be something to it, right? Eeer...maybe not. When I visited Reality Rocks on Sunday the 10th at 11 a.m there were more cameramen and reporters on the show floor than paying attendees. There wasn’t much action at all on the ground floor.  Cast members from Storage Wars and the Antiques Roadshow discussed turning knowledge of collectibles into a reality show career as a small group of convention-goers listened. Elsewhere on the first floor, Hot Topic Goths Kynt and Vyxsin from The Amazing Race added a bit of rock 'n' roll style with lots of mascara and neon pink.
The scene was a bit livelier upstairs where workshops and screenings convened. How to Become a Host/Reality Star – Parlay Your 15 Minutes of  Fame into a Career  featured a panel of  lesser-known reality starlets discussing branding and how to keep your name in front of the public. The participants reinforced the notion of constant self-promotion and reinvention. The young reality show girls on the panel  had a lot in common -- they all sported slight variations of the same hairstyle, makeup, clothing, attitude, and speaking voice. As they walked past, I thought, 'They just look like the girls who work at Claire’s Boutique in the mall.’  But that’s the whole point of reality shows – anyone can be famous. Maybe that's the reason the genre keeps going and going and going like the Energizer Bunny.  It provides the easiest opportunity yet for people to be famous, with or without talent.
With many of these shows, the “talent” seems to be simply existing—being “you”, albeit a caricatured version of “you.” Paris Hilton and the Kardashians have been in the spotlight for years without any old-school talent and it doesn’t look like they’ll develop any (or leave the media circus) soon.
Other panels included The Power of the Internet, which featured the host and creator of Yahoo’s Daytime in No Time recaps. I never realized the show was sponsored by J.C. Penney’s, and that all the clothing worn by the host and the set furniture was provided by the retailer til  I attended this panel. Integrating YouTube, Internet webisodes and other online video to pitch products in a seamless blend of entertainment and advertising is a hot marketing trend right now. It was also mentioned in the workshop, Brand Yourself: Using Social Media to Advance Your Career in Reality TV. This panel was standing room only and provided the liveliest discourse of the day. The verdict: YouTube is tops for aspiring reality stars and other publicity seekers. Constant Twittering is another essential.
The last panel of the day was the best and the funniest. Playboy TV debuted TV for 2, which is geared towards couples. Celebrity Sex Tales, a new Playboy series, features C and D list celebs like Nicole Eggert and Corey Feldmen talking about sexual shenanigans while wacky cartoons illustrate their stories. (Judging by one of the clips, Corey Feldmen has borrowed one of Gene Simmons' toupees.)  Adrianne Curry of America’s Top Model and Surreal Life was on the panel and is one of the storytellers on Celebrity Sex Tales.  Curry is an example of a reality show performer who has created her own distinct persona --the sexy smartass. (She’s sort of a reality show-only version of Kathy Griffith). Ron Jeremy, appearing at the expo via his Surreal Life appearances, was in the audience for this one. The panel ended with a screening of a new series called The Stash. The program features host Rachel Perry making snarky comments about sex stories in the news and ridiculous porno clips. Apparently, there’s a big market out there for midget porn. Who knew?
The inaugural Reality Rocks Expo lacked star power and interesting performances. I’m sure fans would appreciate appearances from controversial divas like Tamra Barney or Gretchen Rossi of Real Housewives of Orange County in future incarnations of this event.  Stars from music-oriented shows like Rock Star SuperNova and VH-1’s tragically under-publicized Bands Reunited could spice up the performance stages.
Posted by JadeB at 12:43 AM No comments: