Dreams and Shadows: A Film Review and an Interview with Director Tamarat Makonnen 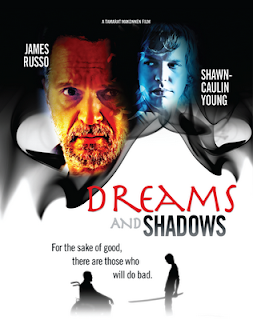 Dreams and Shadows is a promising directional debut from Tamarat Makonnen. The movie is half-psychological drama, half-suspense thriller. It tells the story of an alienated teenage boy, Billy (played by Shawn-Caulin-Young) who works at a fast-food joint to support his paraplegic veteran father John (played by James Russo). Billy’s life is absolutely joyless. He’s bullied by local kids on his way from work and comes home to deal with his alcoholic, moody Dad. He entertains action fantasies about Samurais while alone in his bedroom to relieve his boredom with everyday life.  He has a girlfriend, Sarah (Natalie Garcia Fryman), a foster child with problems of her own. She is his only real-life friend, and they both dream of a way out of their dreary existence.
Billy strives to find out more about his mother, who died when he was quite young and banters back and forth emotionally with his Dad. Russo turns in a strong performance as the troubled Dad who camouflages a shocking secret. His character is at turns caring, irresponsible, violent and deceitful. One of his scenes with a prostitute who’s put-off by a sudden display of tenderness is especially heartbreaking.
The highlights of the film take place during the first half, where we get a sense of the characters backstory and Billy’s desire to change his life. Although the set-up is somewhat slow, it piques the viewer’s curiosity. We want to know more about what’s happened to John and how his wife died.
We get answers to these questions when the film veers from psychological drama into suspense thriller in the second half. This change in cinematic mood jolts the viewer into what seems like an entirely different film. It’s not a bad "second half", per se, it just doesn’t mesh well with the first part of Dreams and Shadows. As Billy learns about his Dad’s secret life and sets out for revenge, the film resembles a TV detective drama with a lot of twists and turns and characters who ultimately turn out to be more Mr. Hyde than Dr. Jekyll.
Makonnen’s script shows a keen knowledge of dialogue and character development until the revenge scenarios kick in. Even the pulp novel/detective drama portion of the film is well-paced and well-acted, though incongruous with the first half of Dreams and Shadows. Makonnen’s feature film debut shows a lot of potential. He is obviously a serious student of cinema and it’s apparent in this uneven but emotionally riveting film. 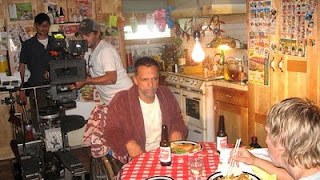 
JB- What is your film background?
TM- Well after attending Virginia Union University I went back home to New York where I cut my teeth working on all kinds of film projects. Commercials, features, documentaries everything. Picking the brains of any and everyone on set that would lend me an ear. I was a human sponge. Eventually I saved enough to buy a 16mm camera and began shooting short films. This was in the 90s so digital wasn't an option (laughter).
JB- I read in your bio that you directed music videos before making Dreams and Shadows. What videos did you direct?
TM- I've directed videos for dead prez "Mind Sex", Boogiemonsters "The Beginning of the End" and most recently L.E.G.S "Journeyman". I've also directed videos and EPKs for artists like Luke, Lil Kim, C-Bo, Stone Rivers and Neyo, plus a few others.
JB-How did this serve as a springboard to making a feature film?
When possible I enjoyed incorporating narratives into the music videos that I directed. In that way the music video essentially becomes a short film. Also at the time labels were putting a significant amount of money into music videos. So in some cases you would have the same amount of equipment and crew members working on your video set as you would if you were shooting a feature film. It was great practice for what was to come.
JB- What inspired the screenplay for Dreams and Shadows?
TM-After moving to Los Angeles I began to focus more on my writing and Dreams and Shadows was one of those projects that had been lingering in my head for a while. When I started to write the script I knew I wanted to create characters that would haunt you later. Russo's character being confined to a wheelchair while his addictions and dark secrets tortured him was an intriguing premise to me.
As for the Billy character he's an outcast. Everyone knows an outcast. Their usually misunderstood for being different. I knew that the combination of the destructive father figure and the fragile son who's standing at a proverbial cliff would create an interesting scenario. Ultimately I wanted to create a claustrophobic existence for the audience to peer into. Sort of like looking into a snow globe filled with dirt and grime. You want to see the characters break the glass.
JB-What was the hardest scene to shoot (either technically or emotionally)?
TM- Technically the dream sequences where pretty challenging because of the elements. We shot those on a private ranch in Agua Dulce near Santa Clarita, California. It was about 100 degrees and steadicam operator was carrying the camera rig on him in this blistering weather in the middle of the forest. There was a lot of stop and go shooting because we wanted to make sure he stayed hydrated. It was tough but it all worked out.
Emotionally the scene where Billy returns home from his twisted revenge mission and he's crying in his dad's arms was intense. The actor Shawn-Caulin Young really took his time getting prepared for the scene and when we began shooting he just exploded. It was one take. He was totally exhausted afterward.
JB- Can you tell me about the casting process? How did you find the film’s stars, James Russo and Shawn-Caulin Young?
When Shawn walked in I didn't think he was right for the role physically but after his audition I began to look at him from a different angle. He brought an awkwardness and vulnerability to the character that was necessary. He's a talented actor and I'm sure you'll be seeing more of him in the future.
Russo is a veteran, the guy has worked opposite Robert De Niro. I heard through our casting director Neely Gurman that he was interested in the project so we set up a meeting. We had lunch and talked about the script, the character and what I was looking for from the actor who would play the part. He's a very passionate person and so am I so it worked out well.
JB-Are you working on any new film projects?
TM- I have another feature that I'm developing as well as a documentary that I will be directing this year.
JB- What films and directors have influenced you and why?
TM- Wow, it's so vast. Everything from Federico Fellini's "La Dolce Vita" to Spike Lee's "Do The Right Thing" to the Shaw Brothers' films. I'm big fan of the fantasy/action genres of the late 70s and 80s, Star Wars, Raiders of the Lost Ark, ET, etc. ... I truly believe that Lucas and Spielberg sparked the imaginations of an entire generation with those films. In recent years foreign films like Fernando Meirelles' "City of God" and the Swedish vampire film "Let the Right One In" really inspired me as well.