Film Review-The Squid and the Whale 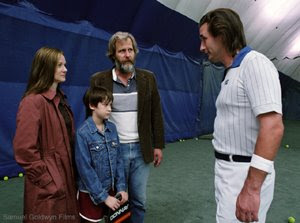 The Squid and the Whale is loosely based on the unraveling of director Noah Baumbach parents' marriage in Park Slope, Brooklyn in the mid-1980s. (Baumbach is best known as the co-writer of The Life Aquatic with Steve Zissou.) In this fluid, moving comedy-drama, there is no neat, happy ending or high drama. The Squid And The Whale has much more in common with French films like Murmur of The Heart and The 400 Blows that explore divorce, coming of age and sexual awakening than standard American fare like Kramer Vs. Kramer.

Jesse Eisenberg plays Walt Berkman, an intelligent but troubled 16 year old who subtly idolizes his Dad, struggling writer Bernard (Jeff Daniels). Joan Berkman (Laura Linney) has taken up writing as a second career, and fares much better than Bernard, receiving more accolades with less effort than her estranged husband. (The character of Joan is based on Baumbach's mother, former film critic Georgia Brown.) The Berkmans are certainly part of the literary community of Park Slope in the 1980s. Even the sparsely furnished rooms in their home say a lot about the family. Instead of sports posters, their apartment is decorated with a framed still from Breathless and a one-sheet from The Mother And The Whore. The intellectual milieu seems not to add depth to the family's relationships, but to steel them in icier terms. When the parents call 16 year old Walt and 12 year old Frank in for a "family meeting", their lives are thrown into disarray. Not that everything was hunky-dory beforehand. Frank Berkman, played with conviction by Owen Kline, (son of Phoebe Cates & Kevin Kline) deals with his anguish in other ways. He drinks beer and masturbates at school. Disquieting scenarios, perhaps, but the staggering honesty here exposes the ugly truths not only in Baumbach's own story in the stories of a thousand other children of divorce. During a school talent show, Walt cadges Wish You Were Here by Pink Floyd as his own. After he's found out, he explains matter of factly to a school psychologist that "I felt I could have written it so the fact that it was already written was kind of a technicality."

The Squid and the Whale succeeds on several levels. Baumbach's script is literate and, at turns subtle, heartbreaking and wryly funny. The subtle yet thorny ways parents and their power plays and idiosyncrasies effect children is explored with depth and conviction. Walt idolizes his father and is Bernard's only ally until Bernard alienates him. As any child of divorce knows, most separations are not over the top National Enquirer dramas; the emotions they cause are subtle and manifest pain in different and sometimes bizarre ways. One can't judge Bernard, even though he has no apparent likable qualities. We just take him for what his is, and we don't hate him as one would a villain because his grief is so nuanced and real. All the performances in this film are equally impressive, but Daniels had the toughest canvas to draw on since Bernard is so self-absorbed.

Once a fêted literary novelist, Bernard has hit hard times in his career, garnering form rejection letters and half filled college poetry readings instead of awards. He still manages to attract a literary groupie, bold young student Lili (Anna Paquin). Father and son both vie for her affection. Bernard is so caught up in his own world that he has forgotten how to accommodate or even acknowledge the needs of those around him, including his family. He accompanies Walt and one of his dates, good girl Sofie, to a screening of Blue Velvet, not realizing that the film might be uncomfortable for the girl.

Joan takes up with quirky tennis instructor, Ivan (William Baldwin), who is in most ways, the opposite of Bernard. He becomes Frank's hero and father substitute. While Joan seems like the wronged party, revelations later in the film expose her as equally guilty for the break-up. Baumbach leaves the film's ending open to interpretation, as an unexpected turn of events draws the family together. Tender, funny, flawed and poignant, the characters in The Squid and the Whale could be your neighbors--or your own family. The film's unusual title refers to a diorama at the Museum of Natural History in New York.
Posted by JadeB at 7:52 PM No comments: