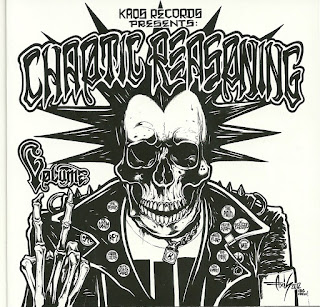 And now we return  to present-day L.A. for a few year-end music reviews....

Older hardcore fans will recognize Love Canal and White Flag, two bands that played the Cathay and other crusty clubs, in the ‘80s. Both bands are still together, in various incarnations, today. The delightfully-named Vagina Den Tata (another Cathay band. I actually saw them in ’83), featuring Michelle Gerber Bell and Pat Smear, contributes Creep Street. Ron Emory (TSOL), False Alarm (featuring Cheetah Chrome) and Peligro are other familiar old-school names on this compilation.

Chaotic Reasoning is non-stop hardcore/punk with no breather. It’s not for the faint of heart. A release party for the CD will take place Jan. 19th at the Vex in East L.A , with live performances by Shattered Faith, the Detours and others. Ex-Germ Don Bolles is slated to emcee.