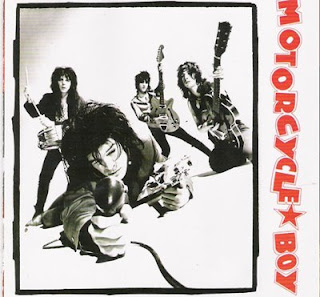 When I wrote for Cover Mag in New York circa 1990, I’d take the subway to my editor’s loft on Varick Street every week. She’d greet me with a shopping bag full of CDs and cassettes containing every conceivable glam and hair metal release, or anything featuring poufy haired guys on the cover. Motorcycle Boy had really good hair, but their album Popsicle was not included in any shopping bag ‘o glam. I found a copy at the Record Explosion on Fifth Avenue and grabbed it instantly. No, I’m not talking about the Scottish band of “Big Rock Candy Mountain” fame, but the Hollywood misfits led by charming gadabout Francois on vocals & bass. I never saw the band in NYC but when I moved to Hollywood, I finally saw the reconstituted version in 2008. Who could have predicted that 18 years later they’d still be around and I’d be back in Hollywood? Perseverance pays off.

Hollywood’s Nickel and Dime label reissued Popsicle this summer on as part of a self-titled retrospective of the band’s output. Motorcycle Boy captures the band’s raw garage-punk sound with a remastered version of Popsicle and nine bonus tracks. Produced by the Dolls’ Sylvain Sylvain, Popsicle is a pure adrenaline rush-- but it doesn’t singe your eardrums. It has a Ramones-y vibe in the sense of short, riff specific tunes and trashy humor.

OK, so on the cassette cover they looked passable enough for the hair metal section at Record Explosion, but that’s where the similarity ends. They were the swaggering glampunk rebuttal to the hair metal scene inundating Hollywood in the late 80s/early 90s (except for stripper and drug dalliances, of course.) Hell, they even had a song called“I Hate the Sunset Strip.” And with other songs like the trippy “Supersonic”, the surf rock tinged “Honolulu Baby” and the single "One Punch/Feel It", their music-and persona- were way too punk for Hollywood in the late ‘80s/early 90s. The Nickel & Dime reissue contains several pages of liner notes by band members, a DVD with a complete show from 1993 and a 1990 rehearsal.

The band was based in New York for a brief time, but returned to Hollywood to record Popsicle. John Blazing had replaced original guitarist Ratboy by this time. After a respite to deal with the usual rock 'n' roll problems, Motorcycle Boy returned to play live shows with a revolving cast of members, including Blackie Onassis of Urge Overkill and Johnny Witmer of The Stitches.

If you’re in Hollywood, catch the band live. They still put on a great show, even without onstage drunkenness and crack breaks. And I’m happy to report that 18 years after Popsicle’s release, Francois still has good hair.

P.S. -
For an upclose and personal look at the band, watch this interview on Rock and rolltv or check out their MySpace page