From the Archives: Interview with Tina Root & Susan Wallace of Switchblade Symphony, 1999

This is an interview I did with Tina Root and Susan Wallace of now-defunct Goth/darkwave band Switchblade Symphony. The band released four albums for Cleopatra Records before breaking up in late 1999. Tina and guitarist George Earth now perform in the band Small Halo.  This interview first appeared on Suite 101.com's Rock Music site.


It's been a long and fruitful road for Susan Wallace and Tina Root, collectively known as Switchblade Symphony. In nearly ten years together, they have paved the way for female industrial artists, and toured with big-name acts such as Sisters of Mercy, Type O Negative, Gary Numan and Front Line Assembly. They take the combination of cartoon innocence and somber imagery to a more refined level, than, say the over the top renegade wilderness of Marilyn Manson. Experimentation with trip-hop on "Bread and Jam for Francis" gave way to the slick, landscape of their newest CD "The Three Calamities". Taking their formal musical training, love of bands like Nina Hagen, Skinny Puppy and Tom Waits, and love of Gothic imagery, Tina and Susan have created a CD that should propel them on their way to a larger and more eclectic audience.


Like the wide-eyed subjects of a Keane painting dressed in blue PVC leather, Tina Root and Susan Wallace, the vocalist and keyboard player, respectively, of Switchblade Symphony create music that is a study in contrast, a combination of disparate elements that work so well together, the effect is totally natural.

The San Francisco based band recently released their third full length CD "Three Calamities" (Cleopatra Records) and just completed a club tour of the U.S. and Canada. I spoke with Tina & Susan before their show at Downtime in Manhattan this summer. Tina Root, the bubbly vocalist, performed in school and got her first taste of rock 'n roll playing bass in a boyfriend's band. Eventually, she gave up the bass and became the group's singer. Susan began her performing career in plays, did some modeling, and turned to music by singing in the school choir in junior high. Her first band experience was less than amiable, as the members of the electronic-dance group she joined told her that she'd never get anywhere. And where are these blundering psychics now? "I'm sure they're very happy working at Tower," Tina interjects. The first well-known female fronted band in the industrial realm, Tina and Susan met in 1989 when a mutual friend introduced them. "I was looking for a band, and she had just left a band," says Tina, "They knew us, and were like, "You guys really need to get together, you really need to talk on the phone!", so our first initial meeting was on the phone and we spoke to each other for eight hours straight." 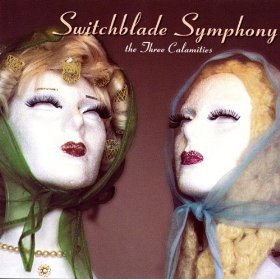 Soon the burgeoning friendship turned into a musical partnership as well, and Tina and Susan began writing songs and producing homemade tapes. They were a fixture on the San Francisco club scene, hanging out and playing their tapes for anyone who would listen. "We'd be like "Come into the parking lot and listen to our demo tape," and they'd be like "Oh, my God, you guys are psycho," Tina recalls, "Back then the tapes were really bad quality, and it was kind of humorous. We did it to everybody."


Their persistence paid off, and soon Switchblade Symphony were a mainstay on the San Francisco industrial scene. Industrial music, macho as heavy metal in the early part of its reign, welcomed Tina and Susan enthusiastically. "We always played with the boy industrial bands- it seems to have gotten bigger. There are more women around." Switchblade's first gigs were at an Italian restaurant. and ardent word of mouth ensued, followed by a compilation appearance (the song Mine Eyes) and the re-release of their first single "Mine Eyes".
Songs from Switchblade Symphony's incubation stage were featured on a special fan club only CD called "Scrapbook" (only 2,000 were initially pressed) , but we've been getting a lot of response from people wanting it, and including the song after which the band is named, just for the nostalgia of it since its the first thing we created."
Signing with industrial stalwart Cleopatra in 1995, Tina and Susan solidified their line-up with guitarist George Earth and drummer Eric Gerbow and their first CD, Serpentine Gallery was released, consisting mostly of older material. The second CD, 1997's "Bread and Jam for Francis" (named after the children's book) expounded on playfully Gothic imagery and melodies, exploring a feminine terrain with a sense of humor that is rarely examined in any electronic based music. The studio experience of making that CD was a bit more structured and "hands-on". "It seemed a little rushed to us," says Susan, "We had recently gotten new equipment and were learning things and I started to tackle the technical side and when you first start its very mathematical and robs the live acoustic feel from it. It’s kind of hard to mesh the two together and that coupled with the short amount of time we had (in the studio) where we didn't get to flower the songs with the pretty little things to season it with - with the newer ones (the songs on "Three Calamities") we're trying to put both of those together. For mixing down, we like to use old vintage analog which really manipulates and changes the sound and gives it a warmer feel - we put live drums over the drums to give (it) a more three dimensional feel, " notes Susan. Three Calamities was recorded in Daniel Lanois' El Teatro Studios and mixed by Grammy award winning producer Mark Howard.

Switchblade Symphony have toured with acts as diverse as 80s' techno pioneer Gary Numan (who specifically asked that they open for him) as well as dark-hued Brooklyn based rockers Type O Negative. Opening the West Coast leg of Type O's 1997 tour, the band was well-received by the hard-core crowd, whose glittery stage set up and bubble machine provided a marked contrast to their tourmates' stark image. Late Type O singer Peter Steele was a big Switchblade Symphony fan, and the admiration was mutual. "He has such a beautiful, melodic voice," says Susan.


Although the band is embraced by the "Goth" community, they eschew labels. "We're just weird," comments Susan. "We are dark and moody, and like to wear black sometimes. The music is dark and melodic, so I think that the Gothic scene embraced us and opened their arms to us, and that's where our core following is - and we're delighted that they like us. But we're more like nursery rhymes, Witches (from "Bread and Jam for Francis") is like a humorous song, with no underlying dark magic or anything."

Tina and Susan make most of their costumes, and Tina fashioned glitter-encrusted kitties that are a mainstay of their stage show. The atmosphere of each show varies, with forest, underwater and snow themes featured. The band has even expanded its' merchandising, with Switchblade Symphony tank tops, panties and other merch for sale at their shows - and selling briskly. Touring two to three times a year for the past few years, they've graduated from traveling in vans to a fully-equipped tour bus, enjoying the fruits of their labor. "We've been getting along so much better," says Susan, "We're eating better, sleeping better."


With "Three Calamities", Switchblade continues their evolution from underground industrial phenomenon to a smart, sharp-tongued but radio friendly band with songs such as "Invisible" and "Wicked." Tina puts her operatic training to good use, her voice trilling like a lush instrument, adding untold nuances to her terse but haunting lyrics. Susan's keyboard melodies are lean and ethereal, lending a quality that is more dream-like and contemplative than the relentless droning of many other industrial bands. "Therapy" verges on industrial/funk with an infectious, perfect for the dance floor beat. Switchblade Symphony echoes Siouxsie with a cleaner, more sophisticated edge. Tina and Susan ,along with drummer Eric Gerbow and guitarist George Earth, are gifted musicians, pushing American electronica to newer, classier limits.