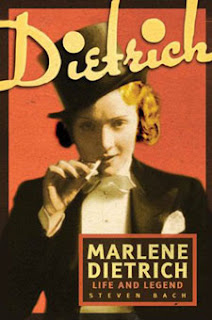 Bach documents Dietrich’s early career in Berlin in the first part of the book. Actress Mia May reminisces about the young Dietrich, “People used to follow her through the streets of Berlin; they would laugh at her, but she fascinated them; she made them talk.” Bach reveals that Dietrich studied to be a violinist, but turned to acting after a wrist injury stunted her music career. The chapters "Home Front" and "Lili Marlene" chronicle Dietrich’s role as a tireless performer for the USO and supporter of the American war effort.

Much of the book centers around her Svengali-like relationship with director Josef von Sternberg, who cast her as Lola-Lola in Blue Angel and engineered her iconic films Morocco and Blonde Venus. Author/film executive Bach has something of an inside track on the subject, since he studied film with von Sternberg. Bach sprinkles the book with inside details about Dietrich’s love affairs with Jimmy Stewart, French actor Jean Gabin, John Wayne and other famous men. Most of these affairs took place while she was still married to her only husband, Rudolf Sieber. Dietrich remained friends with Sieber til his death, even befriending his mistress and paying many of the couple’s bills. Along the way, Bach offers more mundane, behind the facade tidbits, such as Dietrich’s insistence on a sparking clean dressing room prior to cabaret performances. She sometimes arrived early, scrubbing floors herself if they were not to her liking.

This 626-page book includes a filmography and over 100 black and white photos. While it doesn’t provide the insider view of her daughter Maria Rivas’s Marlene or mention much about her bisexuality, even film buffs and hardcore Dietrich fans will learn something new from this biography. Some readers may find the prose long-winded, but it’s a vivid read that befits Dietrich’s life.

Read more at Blogcritics :http://blogcritics.org/books/article/book-review-marlene-dietrich-life-and/
Posted by JadeB at 10:24 PM No comments:

Memories of El Duce (of the Mentors)

Some rock ‘n’ roll characters  are so offbeat and offensive to the mainstream mindset that they are forever destined to be cult figures.  El Duce (real name Eldon Hoke) of the Mentors was such a character.

“What the hell is this?” I thought. One mohawked kid at the back of the club had his own critique “What cultural significance!”, he bellowed.

The next morning, I called up my friend Tony from the pay phone at Howie’s Weekly Apartments (now a Motel 6), where I was living at the time. “Tony, I said, “You’re not gonna believe what I saw at the Cathay last night.” I described the executioners’ hoods and the whole shtick.

“What a buncha fuck!” Tony responded. His curiosity was piqued and he just had to see this abomination for himself.

In Hollywood, in the 1980s and early 1990s, everybody encountered El or the Mentors. Duff McKagan, in his book “It’s So Easy and Other Lies” recalls the time Sickie Wifebeater, the Mentors’ guitarist, asked him to be the band’s new bass player. Duff declined. A wise choice.

After a few years of club-hopping around Hollywood, my friends and I knew El well enough to enlist him as comic relief in a video we made.  El crushed a beer can on his head and danced around- the famous Duce dance.

On a stormy Valentine’s Day in 1986, the Mentors played a gig at Club Lingerie.  I told Tony, “We’re all going to see the Mentors.” Tony responded with a bloodcurdling “NOOOOOOOOOO.” After the initial novelty wore off, this was a common reaction to seeing the Mentors stage act.

As I continued my rock ‘n’ roll travels, I met people in New Orleans and Florida who had encountered El, usually at sleazy bars. Most descriptions of El Duce contained the words “drunk” and “passed out.”

In the mid-1990s,  El claimed that Courtney Love had offered him money to kill Kurt Cobain and he was filmed for the documentary Kurt and Courtney. A few weeks later, a train in Riverside offed him. The conspiracy theorists had a field day with that one. However, El was more than capable of walking in front of a train of his own volition.