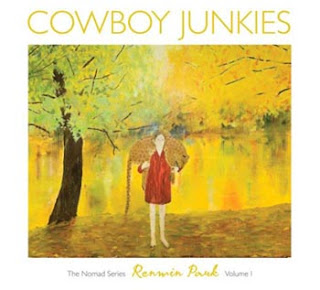 Renmin Park, the first of four concept albums in the Cowboy Junkies “Nomad” series, is based on songwriter/guitarist Michael Timmins’ visit to China. He and his family adopted two Chinese children, and spent time taking in the culture and music of the country. The title refers to a public park in Zhengzhou, a city in the Henan province.

The Cowboy Junkie’s signature bluesy alt-folk sound blends with lyrics about everyday life and history of China. The album’s intro veers from sounds of a parade into the acoustic title track. Michael's sister, Margo Timmins, lends pensive vocals to bring the lyrics, a description of daily activities in “Renmin Park” to life. There are unusual sound bits through the entire CD. The improbably titled “Sir Francis Bacon at the Net” has snippets of a badminton game underscoring Michael Timmins' psychedelic-flavored but-folky vocals. “A Few Bags of Grain” is a world-weary tale of man recently released from a labor camp and his introduction to “A world gone insane.”

Hazy, sparse keyboards and a judiciously-used string quartet, add the finishing touch to this ambient slice of alt-rock meets Chinese culture. Renmin Park is nice to listen to in small increments, but it’s got that bluesy introspection and the backdrop of Chinese oppression and change don’t make for a toe-tapping time. The downbeat mood does change with “Stranger Here”. It has a hummable melody that would fit right in beside any mainstream rock tune. The lyrics describe a man’s spiritual struggle, “And I could tell you about the evening/that I was out drinking/and fell asleep by the well/I am the righteous man/the one you’re looking for/I am a stranger here”

Renmin Park features a reworking of two Chinese pop song. Composer Xu Wei’s tale of long-distance heartbreak. The lilting "My Fall” translates well into the Junkies’misty, melancholy style. Zuoxiao Zuzhou ‘s “I Cannot Sit Sadly By Your Side” combines haunting piano work throughout, a hint of native Chinese instrumentation, and a crescendo of electric guitar near the end to portray a tale of intrigue and murder. “Little Dark Heart “is a lullaby to loneliness, beginning with the lyrics “It’s a funny start / but I have no home / I have no name / I have no one / Except this little dark heart.” In the hands of a less accomplished band, it would be sorrowful overkill, but the Timmons siblings make it work. The confident strut of “(You’ve Got to Get) a Good Heart” provides a respite from Renmin Park’s mostly pensive tunes for 4 minutes and 27 seconds.


A musical journey to China that meshes well with the Cowboy Junkie’s normal modus operandi, Renmin Park is one of the band’s most ambitious projects to date.

Terrestrial radio is now pretty much relegated to teenie-bopper nonsense, bad hip-hop, and talk shows dedicated to  political bickering. So where can a bona fide rock music connoisseur go to escape the overexposed and lowest common denominator sounds of Kanye West, Katy Perry, and Lady Gaga? Why, to the Internet – and to KROQ-FM  - at least on Sunday nights for the reconstituted Jonesy’s Jukebox.
Jonesy is back on KROQ and it's kinda ironic since his former station, Indie 1031, was supposed to knock KROQ out on its butt five years ago. Indie's ascent didn't last, however, and the company's owner, Entravision, pulled the plug on the punk/alt rock format in 2009.   The terrestrial station continues on FM in a Spanish-language format, while the punk/hip alt rock music still flows freely on the Internet.


Jonesy’s new  Jukebox is on KROQ on Sunday nights 7 p. m. to 9 p.m. Pacific Time. His old partner-in-crime, Mr. Shovel, joins him as producer. The playlist so far lacks the quirky novelty songs and obscure 1970s glam rock of  the old Indie shows. It concentrates on electronica and post-2000 indie rock, like Julian Casablancas, Daft Punk, the Duke Spirit and Black Keys. But there’s the occasional local L.A. band find (Fitz & the Tantrums), and songs by Jonesy favorites like Eno and Primal Scream.
Another respite from the mostly non-existent rock radio landscape can be found on Internet radio oasis ErrorFM. You can find any kind of music here (just like Sirius/XM Satellite Radio), but you don’t have to shell out money to listen. DJs include ex KMET and KLOS staff announcer Larry Woodside, Alan Lohr (BuddhaMan, as mentioned in the previous post on Dolly Rocker Movement) formerly of KROQ. The specialty shows on ErrorFM run the gamut from Pod Zepplin and Floydian Slip to Electrique (electonica) and Donthink ( trip-hop). Every type of music you can think of (and some you haven’t) are offered by freelance DJs from all over the world.
One of the most popular shows on ErrorFM is Cyril’s Hollywood Jukebox, hosted by Cyril A. Ruth, one of the founding members of New Orleans punk band the Normals.  The two-hour show is streamed live on ErrorFM’s Channel 2 on Thursday nights from 8 p.m. to 10 p.m. A recent show featured New York glam, garage, punk and psychedelic bands of the past and present, including the New York Dolls, Fleshtones and new bands London Egg, The Choke and The Above. One of the highlights of the show is a weekly mini-concert featuring a 15-20 minute segment of a live concert. The New York show featured The Chesterfield Kings.
Posted by JadeB at 12:36 AM No comments: