(This article was first published on Modamag.com in 2001 in a slightly different version under the byline Marianne Moro)
For those of us old enough to remember, radio was once a kinder, gentler medium. Now I listen to and enjoy shock jocks as much as anyone. Howard Stern was never a problem for me, its just that after 10 years you get burnt out on strippers having sex with deformed midgets, and you move on. The reported downturn in Howard's ratings proves that people can tire of anything, no matter how initially weird, disgusting, or titillating.


The first DJ I remember hearing was a guy named Art Roberts on WLS-AM 890 in Chicago. I stayed up late Sunday nights when I was supposed to be asleep for school the next day while my Mom's radio played the mellow voiced DJ spinning platters like "A Rose And A Baby Ruth" and the Fendermen's "Mule Skinner Blues." At first I thought the show had no commercials, then I realized the commercials were actually woven into the convivial stories the DJ told. These are among my first memories of anything.

As I grew up, so did WLS. Soon the smooth patter of Art Roberts and Barney Pip gave way to the deadpan sarcasm of Larry "Uncle Lar" Lujack. Within a year, the music metamorphisized, with Gogi Grant replaced by Janis Joplin and the Fendermen usurped by Sergeant Pepper era Beatles and "In-A-Gadda-La-Vida". Uncle Lar was neither happy-voiced announcer or hippie dippie weatherman. He forged his own unique style of understated sarcasm. It's no surprise David Letterman cites him as an early influence. Well-known DJs are usually famous for being over the top, yelling and screaming, and just being plain loud. Lujack, however, played against type. Lar had true daily comedy bits on his show that didn't involve obvious teeny-bopper humor.They included the "Klunk Letter of the Day" - a letter from a listener reamed by Uncle Lar and the "Cheap Trashy Show Biz Report." Uncle Lar put celebrities in their place with a simple "umm-hm" and a quick segue into the next story. Radio ad legend Dick Orkin contributed two serials, "Chickenman" and "The Tooth Fairy",which were similarly tongue in cheek. These serials appeared on dozens of other stations from 1969 through the early '80s.

Lujack left WLS for rival station WCFL in the mid-70s. A true illustration of how radio -as well as other media - have changed to favor the performer over management occurred when Lujack, unable to get out of his contract, was forced to stay on air when WCFL changed its format to beautiful music. ( Beautiful music was the 1970s equivalent of New Age music.) Fortunately, Super CFL bought out Lar's contract, and a few months later, he was back at WLS.

Uncle Lar now shared the airwaves with such notables as Tommy Edwards, Chris Eric Stevens, Ron Britian, John Landecker (more on him later), and in the 1980s Steve Dahl and Garry Meier (of Disco Demolition fame.) There was no love lost between Lujack and Dahl, as Steve insulted him mercilessly without explanation or provocation. This resulted in an infamous on-air confrontation where Steve and Garry left the studio rather than explain why they were constantly bagging on Uncle Lar. Lar took over the airshift, and put Steve in his place. (I'm leaving Garry out of this one.)

Steve Dahl and Garry Meier were consistently hilarious from Disco Demolition through the end of their partnership; they weren't afraid to tell it like it was. Everyone from station management to other DJs to callers were harangued. I have 2 hours worth of cassettes from their 1985 shows on LS and the grin never leaves my face when I listen to them.

Lujack is retired in New Mexico (he always used to threaten that he'd leave radio to become a forest ranger during his rants) Landecker conducts an afternoon show on WIMS-AM.There are no more Boogie Checks; maybe soccer mom checks would be more appropriate for this demographic. Steve Dahl was let go as an on-air jock by WJMK (Jack FM) in Chicago last year. He now conducts a daily one-hour podcast which is available on iTunes and Jack-FM's website. Garry has a conventional talk show on WGN-AM. On Steve's podcast, the topic is basically Steve, but the show is at its best when he pokes fun at his assistants or talks to old cohorts like Buzz Kilman or the Bears' radio announcer Tom Thayer.

You can listen to airchecks from these DJS and other '60s and '70s icons like Charlie Tuna, Gary Owens, and Loehman and Barkley at Reelradio.com
Posted by JadeB at 12:11 PM No comments: 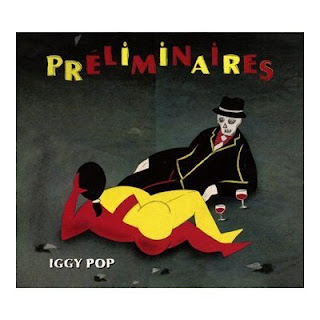 When you think of Iggy Pop, you think of Raw Power, Lust for Life, the Stooges, pre-pre punk’s original wild-man, crawling through broken glass, jumping onto an adoring main floor crowd at a concert, or exhorting them to jump onstage during “No Fun”, …and now (on his first solo album since 2003’s Skull Ring), French jazz? Spoken word? New Orleans swing? It sounds weird, but on Préliminaires (Astralwerks Records), it works intoxicatingly well.

Préliminaires is based on the novel La Possibilité d’une île (The Possibility of an Island) by controversial French writer Michel Houellebecq. A literary provocateur whose fiction deals with subjects of sex tourism, fringe religions, and cloning, Houellebecq was put on trial in France for alleged anti-Islamic themes in one of his books. Loosely conceived as a soundtrack for the film version of “La Possibilité", this short (36 minutes) jazzy collection of Iggy originals and jazz covers conveys an elegant, laid-back decadence that even non-readers can appreciate.

It’s unsettling to hear Iggy crooning the first few notes of the French jazz classic “Les Feuilles Mortes” when that raspy voice jumps out at you. Iggy’s balladeer vocals are a little shaky, and more lecherous than romantic, but his world-weary sincerity and Marc Phaneuf’s clarinet draws you into the eclectic journey that follows. Think of Serge Gainsbourg with a twist. This song provides a leitmotif for Préliminaires, easing into the album and then tying it up with a slightly different arrangement on track 12. “Je Sais Que Tu Sais” combines breathy female vocals in French (by co-writer Lucy Aimé) over heavy percussion and Iggy’s exhortations of “She’s a Business/and business is good”. This is reprised a few tracks later with “She’s a Business”. The repetition fuses the CD together as a cohesive story instead of providing mere filler; there’s a method behind this madness.

In his 62 years, Iggy's seen and done it all and then some. His gruff, smoky voice is perfect for the lyrics “You can convince the world you’re some kinda superstar/ when an asshole is what you are” in the sardonic “I Want to Go to the Beach.” The snarling Iggy-of-old makes his appearance on “Nice to be Dead”, but by that time, we don’t care that Préliminaires isn’t all rock ‘n’ broken glass.

The New Orleans style swing of “King of the Dogs” has a cocky Basin Street swagger, complete with a rollicking brass section. It’s based, says Iggy, on a passage in the book where the main character's Corgi "Fox", talks about how a dog’s life is better than a human’s. The most touching song on the CD though is, “A Machine for Loving”, a homage to man’s best friend and unconditional love. “And however ugly, perverse, deformed or stupid this human being might be, the dog loves him.” The lyrics, taken from Houellebecq’s text, are haunting, and Iggy brings them to life against bare bones guitar accompaniment.

Iggy and producer Hal Cragin have created a sophisticated yet undeniably accessible marriage of music and literature with Préliminaires. It draws you in, whether you have a musical “open” mind or not.