Book Review : They Made a Monkee Out of Me by Davy Jones -2014 Reissue 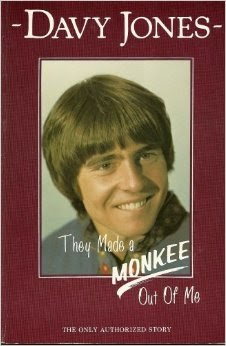 They Made a Monkee Out of Me
Davy Jones with Alan Green
A Book’s Mind, 248 pages

Davy’s long out of print autobiography, They Made a Monkee Out of Me, is now available as a paperback and Kindle e-book on Amazon.com. For years, you had to either find an expensive, dog-eared copy from a reseller or buy it as an audiobook, with Davy reading it! The audiobook is still available.

The 248 page reissue is a informative, fun and sometimes melancholy trip through Davy’s life from his upbringing in Manchester to the 1986 Monkees reunion. (The book was first published in January 1987).

Some of the book is silly and over the top like Davy could be, but its also much more than that. Davy’s memoir is funny and self-deprecating, but it’s also brutally honest and self-aware. His co-author, Alan Green, contributes excerpts that are a bit more journalistic and even handed in their approach.

Davy sugarcoats the chapters about his childhood with humor, but you can still sense the pain. There’s s a sadness to his childhood the prose can’t hide. His family lived in a working-class neighborhood in Manchester, and Davy’s Mom Doris died when he was still in school. He went right from this hard-scrabbled but loving childhood to a jockey apprenticeship and then onto showbiz, appearing on Coronation Street in the UK and Oliver! in the UK and on Broadway.

He writes about the non-stop practicing and improvising in the early days of the Monkees, his friendships with Keith Moon and Harry Nilsson, and encounters with crazy fans (and nice ones!)
As for his Monkee bandmates, he seems to have the most reverence for Peter. Sure, he makes fun of Peter’s brown rice and waterbed phase in the ‘60s, but also says Peter was the most talented musician in the group. Peter also adds a short anecdote to the book, writing about  slugging Davy during the filming of “The Monkees’ Paw”.

About his first meeting with Mike, he jokes “I didn’t like the looks of this. He was slim, dark-haired and good-looking.”

Davy reserves a bit of rancor for Micky, nicknaming him “Skillet Face.” He obviously had a lot of admiration and respect for Micky, but they had a love/hate relationship, at least at the time the book was written in 1986. They hadn’t talked for years before the 1986 reunion.
Davy makes a lot of funny asides about his drinking in the book. His drinking problem was a lot worse than he let on, but at least he was self aware about all his problems, including bad business decisions.

I get the sense Davy was on his own most of the time in regards to business matters (or he was led astray by people he trusted). He got swindled a lot because of it. There are several pictures of contracts and business letters attesting to this. Of course, Davy being as stubborn as he was, maybe he wouldn’t have listened to legitimate business advice anyway! And there was a lot of underlying sadness from his childhood, his father’s death and all the clutter caused by the Monkees’ quick fame.

A few Davy quotes from the book –

About breaking the ice when Mike got combative with Micky and Peter:


“Pick on someone your own size.”  I was looking him straight in the stomach.

About being broke in the early ‘70s:


“A lot of people are surprised you came out of that whole thing with so little,” says a radio interviewer.
“Not at all. Can you lend me a fiver?”


“We rub each other the wrong way – like whenever we’re in the same country.”

Davy writes about his pursuit of - and marriage to - his first wife Linda, doing an impromptu striptease at the Caddyshack premiere in London (in front of his mortified second wife Anita), showering himself with salad in front of his new bandmates at a Denny’s, and other typical Davy antics. He even donned scuba gear and clown nose to get a laugh out of a humorless theater co-star during his post-Monkees days. (It didn’t work.)

Even if Davy’s not your favorite Monkee, you should read They Made a Monkee Out of Me. It doesn’t look like Peter or Mike will write autobiographies. (Peter started one, but shelved it. I think some pages from it appeared on Naked Persimmon). So that means we just have Micky and Davy’s side of the story. It shows how debilitating the rags to riches to rags phenomenon can be. As Davy wrote near the end of the book, “Everything we promoted we got to keep…except ourselves.”