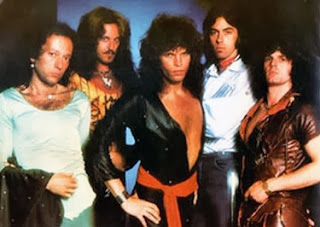 This article was first published in 2001 on Suite101.com.

The weathered newspaper clipping still sits in my file cabinet back home – a review of a rock show at the Aargon Ballroom in Chicago in 1977.  The featured bands  consisted of four relatively unknown acts. Angel, Starz, the Runaways and Piper. Piper was fronted by Billy Squire, (we all know what happened to him) , the Runaways were a training ground for Lita, Joan and Cherie, and Angel copied Kiss' costume shtick, except they dressed all in white. All of the acts provided their own brand of  sleazy ‘70s hard rock. It could be said that each had a gimmick. In the Runaways case they were teenage girls (female bands were considered a "gimmick" at the time), Angel had their costumes and fog machine, and Starz, well, they really didn’t have a gimmick unless you counted singer Michael Lee Smith’s lips and pouty demeanor. (A curious sidenote- Michael Lee was teenie bopper idol Rex’s brother) The controversy over their song “Pull The Plug”, a bluesy, sexy song about euthanasia,  got them a lot of mainstream press.

The band consisted of Smith, guitarist Richie Ranno, drummer Joe Dube, bassist Pete Swerval, and guitarist Brendan Harkin. (Swerval and Harkin were replaced by Orville Davis and Bobby Messano, respectively, on Starz’ last studio album.) Visually, Starz were not far removed from the hair bands that proliferated a few years after their demise.

Their songs were likable in a '70s AOR kind of way – Detroit Girls, Live Wire, Night Crawler capitalized on the preening lead singer sex appeal in vogue at the time, a precursor to the hair band explosion to come. A band like Starz would have fit right in with any of the Poisons and Bon Jovis of the mid/late 1980s.The Starz albums produced by Jack Douglas did not deviate much from this formula. With the exception of their third album, Attention, Shoppers, which temporarily abandoned Kiss-like guitar machinations for a brighter, self-produced pop sound, all Starz’ albums were cut from the same “party all night” cloth. Coliseum Rock, the bands last shot at stardom, flopped, despite good, solid rock songs like So Young, So Bad and Take Me.

Although garnering little airplay and no kudos from critics, the band had a loyal underground following right up to their break-up in 1980. A great retrospective is Brightest Starz:Anthology, released by England’s Heavy Metal Records. The 1970s Starz albums have been rereleased on Metal Blade. Founder Brian Slagel is a Starz fan, as are Tom Kiefer of Cinderella and Jon Bon Jovi. The band still performs, in various permutations, across the U.S.

The band's self-titled debut and their second album, Violation, are included on Kerrang's list of the Top 100 Heavy Metal  Albums of All-Time.