Keith’s “Life”, My Stones “Brush with Greatness” and Fangirl Memories To comedians, Keith Richards has become an endearing punchline. (I’m partial to the Jay Leno line “Why can’t we make planes the way we make Keith?"). And it’s not hard to understand why. Between Keith’s gnarled old pirate looks,  the cigarette perpetually dangling from his mouth as he plays guitar, and the all the  legendary songs he’s written or co-written - songs  that have become intertwined in the fabric of everyday life - it’s a little hard to fully envision the man behind the myth. Sometimes it’s difficult to see where the caricature ends and the real person begins. But despite this larger than life persona, Keith’s survived to tell the tale when many of his contemporaries haven’t. We all know the basic storyline, but now Keith himself fills us in on the truth behind five decades of debauchery and rock ‘n’ roll.

Keith’s autobiography “Life” is, above all else, funny, insightful and poignant. Even though the most widely reported sections of the book have to do with “Mick’s tiny “todger” and the infighting between Keith and Mick, (known less affectionately as “Brenda” for his sometime diva-ish behavior.), the best part of the book is…everything!  Life is 547 pages long, and you don’t want to miss anything, not even the less sensational, non-sex and drugs portions. If you’re one of the few people who haven’t read Life yet, I don’t want to spoil it for you by revealing too much. Keith’s candid witticisms and casual but poignant observations about people and events are a pleasant surprise, and there’s a great one every few pages that will make you smile. About Mick’s fling with Anita, Keith writes. “Anita was a piece of work. She probably broke his back.” He writes of being left behind by a limo in the mid-'60s, surrounded by rabid teen-age girls, as the rest of the band sped away. Of the teen hysteria that besieged bands at that time, he notes, “The power of teenage females of thirteen, fourteen, fifteen when they’re in a gang has never left me. They nearly killed me…You’d rather be in a trench fighting the enemy than to be faced with this unstoppable killer wave of lust and desire or whatever it is - it’s unknown even to them.”

Keith writes of reuniting with his Dad Bert, who lived in the back of a pub for years after divorcing his Mum. Upon their meet-up in 1982, Dad’s comment about Keith’s outrageous rock star behavior was” You’ve been a bit of a bugger, haven’t you?” And Keith didn’t really snort Dad’s ashes…well, not on purpose, anyhow.  We learn that Keef and Anita’s seven year old son Marlon served as his Dad’s caretaker on the 1976 European tour, waking him up in time for shows and keeping him out of trouble. We learn that Keith met Patti Hansen, the love of his life, at Studio 54 while trying to escape Britt Ekland, who was stalking him at the time.

The book brought back so many memories of my teenage fascination with the Stones. Life opens with Keith’s 1975 bust in Arkansas - over a hunting knife, they said. The ‘75 tour was the height of my fandom. I clearly remember all the news stories about that bust and the comedy of errors that ensued afterward. I discovered the Stones when I was 11, through Sticky Fingers and Brown Sugar. I remember walking into the local Turn-Style store (the early ‘70s version of Target) to buy a copy of the single. Turn-Style sold singles shrink-wrapped onto a piece of cardboard. The song names were stamped on  the cardboard in big block letters, along with the title of the flipside in smaller letters. The flipside of Brown Sugar was Bitch. Ooops! A naughty word. I couldn’t let my Dad see that – he might nix my purchase, and I had to have that record.

I told my Dad I’d pay for the record myself.  I headed to the cashier, in my purple crushed velvet coat and the white tam 'o shatter my Grandma knitted for me.  My Dad made small talk with the cashier as I paid for the record. Neither of them noticed the offending title. I was home free! And you can imagine what occurred when I first saw the album live and in person in the LP bin. Well, the record store manager had to replace some shrink wrap that night.

My Stones “Brush With Greatness”

Fast-forward to senior year of high school. There was a picture of Keith in Hit Parader wearing a pink shirt with a wind machine blowing his hair, the whole deal. Yes, Keith was Hit Parader’s rock star pin-up of the month.. This was 1978, the last year any stylist could get away with trying to make him look even remotely sexy.

And his famous skull ring was prominently displayed. I wanted one! I discovered Aleister Crowley because of Jimmy Page and Ayn Rand because of the Rush album 2112, and biker skull rings because of Keith.

Now in 1978, there were no Internet biker ring warehouses, no Target or Hot Topic to supply skull and crossbones rings for suburban teenage girls. I took the bus to the local bikers’ store when the rock ‘n’ roll head shops I visited were bereft of skull rings.

They didn’t have ladies sizes and I have tiny fingers. The grizzled old South Side bikers found this quite amusing. “I don’t think they make this ring in petite sizes,” one of them laughed. “”Maybe you could put it on a chain and wear it as a necklace.”

The Stones played Chicago's Soldier Field in the summer of 1978. Since it was general admission, I could weasel my way to the front of the stage. I cut class to buy my ticket the day they went on sale, and was one of the first people on the field before the concert started. However, as anyone who has spent more than a few minutes standing in the middle of crowded outdoor venue can tell you, it ain’t a pleasant experience. Between the heat and the boredom, I couldn’t take it, and elbowed my way off the field and into the stands, looking for a spare seat. Unfortunately, the show was sold out – down to the nosebleed seats. 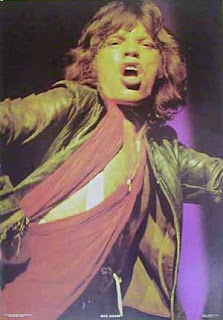 One of my fave posters from junior high.

I happened upon one of my friends, a co-worker from Montgomery Wards, sitting in a cordoned off section way up high in the stands, which had been reserved for radio station contest winners. She snobbily rebuffed me. I traipsed around the stadium while the opening bands played, encountering  drunken, grabby guys, enterprising small-time drug dealers and one helpful soft-drink vendor who tried to help me figure out Soldier Field schematics so I could get backstage. None of it worked.  Finally, I went back to join the dopes standing by the front of the stage. I jumped off one of the barricades between the seats and the field. The drop was several feet, but I was a springy 18 year old, so I could handle it. It was a long drop but I made it so I was back full circle, standing at the front of the stage. I staked my spot about three rows back.  I could see everyone in the band but Charlie.

Spurred on by the exhilaration of getting so close to the boys, and by the pot and beer I’d accepted from iterant bystanders on my trek around the stadium, I waved to Keith. A sweet, totally fangirl move. Keith looked right at me and smiled, then turned to Ronnie and whispered in his ear. Then, they both looked straight at me and smiled.

I was so happy I almost burst. They returned to their playing and I turned my attention back to Mick. Imagine, Mick prancing around doing his thing two inches away from you. It was awesome yet kind of freaky at the same time.

So that was my Stones “Brush with Greatness” My original coverage of the concert, typed on an electric Smith-Corona I nicknamed “Pervert”, is long gone. I remember it being funny as hell and it got me a gig with my college newspaper, the Columbia Chronicle, aka the Chronic, as my friends and I christened it.

That was the last time I saw the Stones in concert. The next time they toured, in 1981, I was in college, living in Lakeview, and going to punk shows at Tuts. No more big stadium shows for me. I was all growed up. I had moved on, musically speaking, but I always return to the Stones every now and then. Everybody has a band that brings back happy memories of their formative years, and for me, the Stones were that band.