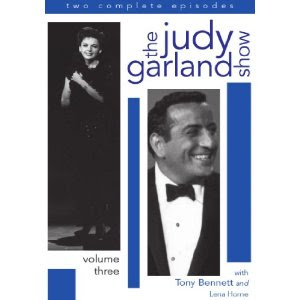 Infinity Entertainment Group continues its DVD releases of rarely seen but beloved TV variety shows with The Judy Garland Show, Volume 3. The two shows on the DVD, from the critically acclaimed show’s only (1963-64) season, features Judy singing with Tony Bennett and Lena Horne and performing standards on her own. Brit fixture Terry-Thomas and Dick Shawn, along with show regular Jerry Van Dyke, provide comic relief.

Twenty-six episodes aired before CBS canceled the show due to low ratings. (It ran opposite Bonanza on Sunday nights.) The variety show had a controversial run, with the firing of musical director Mel Torme and several changes in format during its brief tenure. He even wrote a book about it , the controversial The Other Side of the Rainbow, which was denounced as inaccurate by many others who worked with Garland.

The first episode on The Judy Garland Show, Volume 3 stars the late Lena Horne and the gap-toothed Terry-Thomas ( It’s a Mad Mad Mad World, Those Magnificent Men in Their Flying Machines). Lena and Judy, in matching outfits, sing "Day In, Day Out" to kick off the festivities. Lena has a solo number, "I Want To Be Happy," and sits with Judy for some dueling divas vocals on "Meet Me in St. Louis," "Honeysuckle Rose," and other standards.

Later in the show, Thomas joins them for Noel Coward’s "Mad Dogs and Englishmen." It’s one of those kitschy musical comedy number that’s more curiosity than humor.

Despite all the negative publicity that surrounded Garland at this stage of her career, she still performs with her trademark authority and charisma, even during an awkward “Tea for Two” interview segment with Thomas.

The second show, which aired on December 15, 1963, featured guests Tony Bennett and Dick Shawn. Capri-clad dancers with I Dream of Jeannie ponytails and their beatnik male counterparts join Judy, Tony, and Dick for the gospel-tinged version of "Yes, Indeed." It’s a finger-snapping tune, the kind of beatnik/show biz hybrid that filled up variety show musical segments before the Beatles and AM style pop artists rendered them obsolete.

There’s a pseudo-Elvis rock ‘n’ roll skit with Shawn teaching Van Dyke how to gyrate for the girls. Shawn has an appealing insouciance. And this bit, though dated, still conjures up a few laughs. Both show ends with Garland sitting behind a set of trunks, relating show biz tales to the audience in a folksy manner before capping off the show with a song.

Digitally restored from the original print, the black and white picture is razor sharp.The sound, remixed to 5.1 surround, is crisp and unmistakable. (Purists can choose mono from the set-up menu to relive early Zenith B & W memories.) There are no extras included on the DVD, just the original shows with chapter selection. Infinity has just released the fourth DVD in the Judy Garland Show series (with Chita Rivera and Ethel Merman). There’s no word as yet on future reissues.