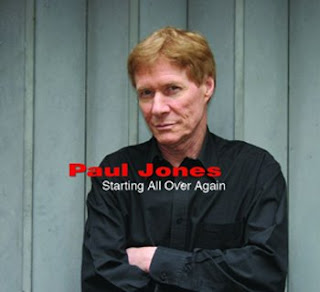 Paul Jones, best known as lead singer of ‘60s Brit Invasion group Manfred Mann, dropped out of the limelight in the late 1960s after a mildly successful solo career in the UK. Jones, who sang such unforgettable pop staples as “Do Wah Diddy” and “Pretty Flamingo,” has concentrated on other musical genres since then, most notably blues as vocalist and harmonica player with The Blues Band.

Collectors' Choice has just released his first mainstream solo album since the 1960s, Starting All Over Again. Although Jones has appeared on several albums since the Manfred Mann days, they’ve highlighted his blues stylings (Blues Band) or interpretations of standards and evergreens (the 2001 CD Showcase).

Jones’ career trajectory has taken many interesting turns over the years. He’s played hero Jack Green on the BBC children’s show Uncle Jack, performed in several musicals including Cats and Pump Boys and Dinettes, and hosted a long-running blues radio show. Cult film buffs may recall his starring role in Privilege, Peter Watkins’ ahead of its time satire about government and celebrity.

On Starting All Over Again, Jones enlists the help of several friends and A-list musicians, from Eric Clapton and Percy Sledge to Austin, TX guitarist Jake Andrews and drummer Mike Thompson. The album was produced by ex-Textone Carla Olson, who has also worked with Mick Taylor, Gene Clark and Otis Rush. Their expertise fleshes out a collection of rock and R&B tunes that convey everything from life lessons and spirituality, to omnipresent themes like “making coffee for one.” Jones’ smooth and studied voice serves the material well. Neither trenchant or watered down, his interpretations lend the songs an air of authenticity without sacrificing mainstream appeal.


“Lover to Cry” has a deep groove and classic electric blues riffs that will keep your feet tapping. Johnnie Taylor’s “If You Love Me Like You Say” stays true to the buoyant R&B feel of the original. “Choose or Cop Out,” the only Jones penned song on the album is a pleasant surprise. A self-help book in a song (“nobody forces your hand if you don’t let ‘em/it’s your decision, baby, what to do with what you receive”), Jones’ effortless tone and blues harp are outstanding here. And Eric Clapton’s familiar guitar work pops right out at you (Clapton also plays on the title cut).

The instrumental jam “Alvino’s Entourage” gives the players a chance to strut their stuff, with more killer riffs by Jake Andrews and plenty of Jones’ signature harmonica work. It’s a fun tune you’d expect to hear at closing time at a Crescent City or Chitown blues club. Covers of Van Morrison’s “Philosopher’s Stone” and Earl Carson’s “Big Blue Diamonds” (a duet with Percy Sledge) round out the collection.

A fine return to form for Jones, Starting All Over Again is a mature sampling of R and B and pop that will appeal to a wide audience. It’s also the first CD of original material released by Collectors' Choice, a label primarily known for reissues and imports.
Posted by JadeB at 6:56 PM No comments: